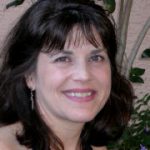 Many years ago, Sally Van Orden began working with clay, that most tactile and malleable of three-dimensional mediums. Lately, she’s been experimenting with acrylic and plexiglass — “You get the movement,” she says, “you get the flashes, the image.”

But during the interim, the delicacy of silk became her vehicle of choice.

Van Orden, an associate professor of art at West Chester University,
uses ink and ink washes on silk to create her versions of organic, natural subjects — an abstracted cactus series, for example, exaggerated the physical traits of different species of cacti.

The resulting pieces can be close examinations of details, but they retain an ethereal quality. That fits her goal of not working strictly representationally.

Van Orden is a self-described Air Force brat, born in Amarillo, Texas, to New Jerseyans but raised in several places, including Albuquerque, N.M.

“That might have something to do with why I like to change mediums,” she says. “With moving around, maybe I’m used to having change.”

While in graduate school at Texas Tech University, Van Orden and her classmates were pushed, she says, to “go large.”

“I often think about size and scale and the impact for the viewer,” she says. “When it’s larger, it can engulf the viewer It can become almost a landscape, in a way.”

She often draws inspiration from her love of the Southwest, but the entirety of her subjects can yield scenes as small as a walnut or as big as a landscape.

“If you cut open a walnut,” Van Orden says, “and you look inside the walnut, and you look at the shape and the grain and the lines within a walnut, then work from that as your inspiration, but work large.”

Her projects in recent years include a large-scale digital printing on silk of her own imagery. She drew from those earlier paintings and created fresh works. Digital media allowed her to repeat the motifs, to rotate and manipulate them. In the end, the silk and sateen cotton pieces ranged from 3-feet-by-4-feet-6-inches to 6-feet-8-inches-by-13-feet.

Van Orden’s medium of choice shifts like her childhood homes, and a more recent project, tentatively called “Deconstruction of a Fossilized Memory,” takes to three dimensions what she had been doing with two-dimensional, large-scale images.

After much experimentation, she’s developed a process of printing her images on acrylic sheets. She arranges the square-foot pieces in a grid, four across and four down. More manipulated imagery serves as a backdrop. The Division’s grant will helkp her complete “Deconstruction” and will supplement her return to clay and acrylic, which she uses to create three-dimensional organic sculptures.

“For me, it’s more about some of the basic color, texture, really some of those basic design composition elements and principles,” Van Orden says. “But an aesthetic level that people can take in and enjoy. I’m not making any kind of a social statement, but I would like there to be a sense of enigma.”