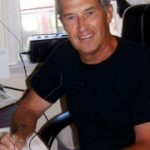 Gary Hanna sees an accessible road for aspiring artists — with enough training and effort, he says, anyone can be an artist to some degree. He grew up in the Midwest, in a family of artists, “and it was OK to play football or appreciate a reasonable standard of living.”

Language, he says, is inadequate to fully communicate one person’s thoughts to another mind. That doesn’t discourage him from trying, though, and his vehicle of choice is poetry — “[W]ith its density, image, juxtaposition, sometimes unusual and surprising use of language and form, [it] makes the bravest effort of all literary art forms to communicate our experiences, insights and understanding of ourselves and the life about us.”

Be not beguiled by beauty
long legs, or shining eye,
the coat, the wings,
the well shaped head with whiskers
better than a tail.

Beware that thin perfectly
shaped stiletto,
extra large on the small head,
securely attached to the muscular whip
of its long curving neck.

Be mindful of its unflinching
disposition, cocked like the hammer
of a gun, ready to drive its nail
home, faster than the flash
of an adder.

The ancient Great Blue Heron
has but one intent, to feed
its mirrored face until
nothing’s left, but a guttural
scream in the dark, like
cloven hooves on brimstone.

Hanna, of Dagsboro, has published about 180 poems in the past 11 years. He writes primarily nature poems, and not always of the sort that expound on the beauty of the natural world. A particularly favorite subject of his stems from Sussex County roadkill.

“If you’ve written for a number of years,” he says, “you start to write different kinds of poems, and you can put them in little collections if you wish to.”

In a 2010 poem called “War,” a deer is made out to have attacked an oncoming car. The results are gruesome:

“It aimed at the front window,
driver’s side, but missed,
the back door was crushed,
glass exploded everywhere,
brown fur wedged in the
window panes, brakes
screamed, blood ate at
the paint, guts splayed
on the back seat, the smell
of victory permeated the air …”

At the end, Hanna contemplates that the car might have been “a family member / of the one that killed / her fawn.”

In another, Hanna contrasts the beauty of a heron with its determination to “to feed its mirrored face until nothing’s left …” Still another pays homage to a rattlesnake that died under the afternoon sun.

It came like a kamikaze
full speed, all two hundred
pounds, but it must have
known, fighting back
for territory, it was angry
at missing the trees,
cool shade for its young,
favorite nesting spot
from before time.
It aimed at the front window,
drivers side, but missed,
the back door was crushed
glass exploded everywhere,
brown fur wedged in the
window panes, brakes
screamed, blood ate at
the paint, guts splayed
on the back seat, the smell
of victory permeated the air,
the car slid to a dead stop,
smoking, it was big and black,
maybe a family member
of the one that killed
her fawn.

Beyond his poetry, Hanna has amassed a library of literary journals and magazines — more than 300 titles and 1,000 issues, thanks to his having reached out to more than 400 editors — and makes them available at The Writers’ Library, which he operates in the Lewes Library. It’s the largest of its kind, he says, outside New York City.

“That’s where literature is alive,” he says, “in the small journals.”

The Division’s grant will provide Hanna with time to write, edit and submit poems for publication. He’d like to get a couple of manuscripts together, and he wants to return to the Virginia Center for Creative Arts, which allows visiting artists with studio space and time to devote to their fields. He also will be able to afford to attend the Dodge Poetry Festival, the largest poetry event in North America.