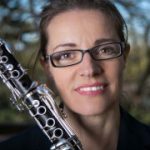 The clarinet, she can explain. People know the clarinet, and those who adore the instrument might have heard Marianne Gythfeldt play as a soloist or chamber musician anywhere from Oslo to Paris to Rome to New York, where she spent the earliest phase of her professional career working in ensembles.

Sound-art, which has absorbed a great deal of her creative energy, isn’t so easy to describe. She takes cues from the concepts of visual art and applies them to sound, whether she’s playing an instrument or reproducing a natural sound, such as water dripping from a faucet.

“I had always been interested more in contemporary music than in anything else, and more of the cutting-edge stuff,” Gythfeldt says, “but you can’t really make your living on that.”

At the University of Delaware, she teaches students “by immersing them in performance projects of historically significant repertoire of all periods.” The position affords her a home base for solo projects, she says, and time to create her own pieces.

Gythfeldt exposes her students to the avant-garde, hoping to influence them with music that might have been foreign to them. It’s not unlike her own path: Gythfeldt
gradually was introduced to pieces that she hadn’t heard before. The first that struck her was Schoenberg’s “Colors.”

“It was literally just that – shifting colors,” she says. “It didn’t have your typical rhythm, your typical melodies. It was so abstract. You could actually hear sound colors.

“If it’s very intense, it would be more toward the red, a warm color. It’s not so much, Oh, this sounds green to me and this sounds yellow. It’s more like the intensity, and maybe coolness to heat.”

It’s a good niche for her, she says. In academia, people seem to perk up their ears when something is slightly different.

“It’s opened doors that I have this fringy research,” Gythfeldt says. “It’s been a profitable thing, not financially, but for me as an artist. But I do wish there were more of a collective where I could be involved with other people and learn from them more, from day to day, because I think I’m the only one on campus besides Ashley Pigford [her partner in the sound-art duo PG2] who knows anything about this. And most of my musician friends in New York don’t do this.”

She sees herself in this field as the chimney-sweep character in “Mary Poppins” — a one-man band, but in her case with a computer, a foot pedal and a microphone.

“With computer technology,” she says, “there are infinite possibilities for what you can do on your own with this creation of sound.”

Though it’s unlikely to come to fruition this year, she’s working on designing, producing and presenting a museum performance series called “Musical Images in the Gallery.”