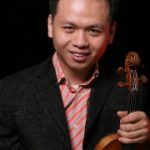 He has performed worldwide on rare Stradivarius violins for more than 150 symphony orchestras. His audiences have included presidents George H.W. Bush and Bill Clinton, Chinese President Hu JinTao and Spain’s King Carlos I.

Xiang Gao, the winner of this year’s Masters fellowship, is renowned as a virtuoso, but his artistic interests go far beyond classical music — and music in general — to the degree that they’ve infused themselves in his performances.

“My big mission is that I want to attract people to music,” he says, “whether to learn music or to listen to music. The healing power of music is unbelievable.”

“I wanted to be able to reach out to a broader audience. I never thought about marketing, I just always felt that this is the only way that works for me. I love theater, I love drama, I love color and visual effects.”

His parents haven’t seen many of his performances, but Gao, 38, says he isn’t trying to impress anyone.

“I’m doing things that I really love to do,” he says. “I just feel very fortunate that my life is filled with music. That’s all I ever wanted as a kid.”

Gao’s goal as a teacher — he’s the youngest professor of music at the University of Delaware — is to inspire his students “so they can move forward with confidence, with no fear, with pride.”

Technology has provided people with far more choices about what to do with their leisure time than there were a century ago. Movies, he notes, can be stored in a phone and watched anywhere.

“It is our responsibility,” he says, “to keep [performances] alive and to bring people to the world of classical music. It’s rewarding when a 4- or 5-year-old comes to a performance and says to their parents, ‘This is really cool.’”

Gao is working on what he calls the most ambitious project he’s ever done. Called “Encounters” and part of his iMusic series of productions, he’s working with Sanford Robbins (the senior advisor to the production and director of UD’s Professional Theatre Training Program), and experts in other artistic fields to create, he says, a new art form called “a theatrical concert.”

“It’s not a play, it’s not a concert, it’s not an opera, but it’s everything above,” Gao says. “You can enjoy music, you can enjoy drama – the audience can really get a feast of many different aspects. It’s like making a movie, a life movie.”

His team of collaborators includes the poet Jeanne Walker,  who is writing the script; the stage director Anne Marie Cammarato, the illustrator David Brinley, the lighting designer Bill Browning and a scenery director from China.

“You could be a writer,” Gao says, “but the stuff you write could still be rhythmic and incredibly dynamic, so it can be like music. You have to be more than just a performer. You have to send messages with music.”

The Division’s grant, he says, will help him arrange a concert recital (likely not involving multimedia this time) to be held sometime in October.

“I’m really not a master at a lot of these different styles that I play,” he says. “I also love being scared. And that’s one thing that I hope my students do in the future, to not be scared. You open the door to a dark room, and you’re scared, but you have to go in. Learning is a lifetime experience, and I’m so enjoying every moment that I’m testing something out. If it’s good music, it’s good music, whether it’s jazz, folk, classical, whatever.”