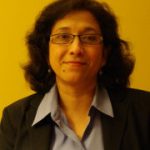 Mahasveta Barua always has had her stories. She just didn’t know it until she left her small town in eastern India for college.

During the summers of her youth, she would head with her two sisters and their mother, along with her aunt and her aunt’s three daughters, to their grandfather’s tea estate. No TV, no movie theaters and poor radio reception led them to entertain themselves. Their explorations of muddy paths through paddy fields, of walks through the forest to see if the monkeys would chase them, were supplemented by the stories villagers and relatives told them.

“We wrote and put on plays, and created newspapers with local gossip our mothers had not heard,” Barua says. “We stayed up late in the dark verandah scaring each other with ghost stories, ignoring our mothers who warned us there was a man-eater on the loose.”

She saw her childhood as unremarkable. Once at college, however, she learned she could enthrall new friends with those stories.

“I realized too that my early habit of making up stories remained,” she says. “I could sit on a train and weave a story about the person sitting across from me, or look at an ordinary scene and imagine the events leading up to it.”

The man in the pale yellow shirt could be seen clearly against the backdrop of trees that skirted the open space at the edge of the village. Bhojo – that was what the village called itself, though no outsider really associated the name with it. Bhojo was, to anyone who traveled by train, a railway station. It had an open platform, sheltered partially by a corrugated tin roof along half its length. The only enclosed area was the little caged room that served as the ticket counter. It was an important stop on the local line of old trains pulled by coal-driven engines, but an insignificant one for the interstate trains bearing such important names as the Brahmaputra Mail and Kamrup Express.

When applying for a Division fellowship, Barua had begun a collection of short stories tentatively called “Searching for the Ghost Slave.” From that effort, one particular story emerged as dominant — friends who read it wanted to learn more about the characters — and has grown into a novel. Its chapters, Barua says, could stand alone as short stories.

Her intended format for “Searching,” meanwhile, has carried on with a fresh collection that now includes five or six short stories she’s now polishing.

In the late 1980s, she went through a phase when she started paying attention to the natural order of things — Barua realized that as elders died, so too were their ways of life. This affected her, and such thoughts were nurtured each time her sons would ask about people in India she knew who had passed away.

“For a while, it almost seems the same, like you can go home again,” Barua says. “But of course, you can’t. And I realized that the normal way of life is that more and more people are not there anymore. They’re dying.”

She has a large and close family who, she says, “are always in each other’s business.” Her fiction often is based on people or experiences from her life, but a fear that relatives would recognize characters drawn from themselves leads her to merge or create elements that set them apart.

Barua, who has lived in America for 27 years and often visits India, grew up with an artistic family. Her mother is a poet. Her maternal grandfather was a well-known poet, and his mother was among the first women to be published in Assamese, the language of the family’s ancestral home.

So when one of her sons decided to attend college to study jazz and play the saxophone, she had no trouble getting in his corner.

“When we grew up,” Barua said, “we never faced a bias against the arts.”

She is an assistant professor of English literature at the University of Delaware, and she plans to lead an event in the fall at the Newark Free Library during which she’ll read from her work.