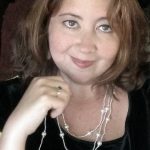 Except for attending Hofstra University on Long Island, writer Shannon Connor Winward has lived in northern Delaware all her life. But her potent imagination, one that is spiced with a love of magic and the unexplained, gives the Newark resident the freedom and impetus to write her way into other worlds.

A University of Delaware graduate, Winward grew up inspired by fairy tales and ghost stories, “anything to do with magic and the unexplained.” Early on, she was an eclectic and voracious reader, and she soon graduated to the works of writers that included Stephen King, Amy Tan and Isabelle Allende. Today, a wide range of poets, novelists and storytellers continue to inspire her, both those from afar and those close to home in her own literary community.

Also a poet as well as a fiction writer, Winward is fascinated with liminality – the anthropological state of transition between states of reality, and “the rites and stories associated with them.” The liminal is able to occupy a position on both sides of a boundary or threshold, something that she explores in her work. Believing that we are “all in between one version of our self and another,” Winward writes works that feature themes of myth, magic and spirituality. She also loves food and food anthropology, and these ingredients are prevalent in the novella Witches Hour that was her Artist Fellow submission.

Before she let them take the stag, Esmelda did one last thing: her hands greased with its own hot fat and gritty with black spices, sigils for gluttony and hunger-lust ground into her palms, she massaged the beast as one might a lover, from the charred wreck of its neck to its crisp, round rump.
Only when she felt the spell leave her, when she was satisfied it was done, did she let her boys near it.

Winward has worked in the state’s non-profit arts world, but she’s long loved the literary landscape of Delaware. She now juggles raising her children with finding the time to write – often “in triage mode,” and she revels in feedback from her readers. The joy of putting down words and the joy in finishing a project – the “look what I made!” feeling – is what propels her forward.

Winward has long appreciated Delaware’s dedication to the arts, and being named a 2018 Artist Fellow strengthens her motivation. It also serves as an important validation of her writing. “I’ve always found meaning and wonder and resolve through the work of writers,” Winward states, and she’s looking forward to using the opportunity to share her work and participate more officially in Delaware’s literary landscape.