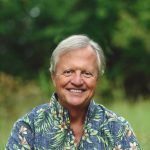 Though he was born in Pennsylvania, grew up in Florida and has lived and worked in a half-dozen states, Jack Clemons has been an enthusiastic Delawarean for over ten years.

Clemons has enjoyed writing since he was very young, and the Lewes resident publishes regularly on science and technology. But a lifelong interest in fiction has recently resurfaced, and his historical fiction novel, The Outliers, set in turn of the 20th century Delaware, is being circulated to publishers by his agent. The work explores “the [1901] boom time in Lewes, when hordes of temporary laborers camped on the beach to construct the new inner breakwater for the US Army Corps of Engineers.” An excerpt has been published in No Place Like Here: An Anthology of Southern Delaware Poetry & Prose.

Some years ago a railroad built a spur over the creek. It went out across the marsh to the beach and right on up to the end of the Iron Pier. I guess it was so tourists just passing through wouldn’t need to transfer into carriages in town. The train never got much use and the railroad went broke, but the tracks were still there and they made a shortcut for me to get from Miss Lil’s house into town.

Along with writing, Clemons has had a long and distinguished career in the air-and-space industry. His brother-in-law, an enthusiastic amateur astronomer, introduced him to the wonder of viewing the planets and the galaxies, but it was President Kennedy’s 1960s challenge to put an American on the moon that inspired him to acquire both bachelors and masters degrees in aerospace engineering. He worked as a lead engineer on NASA’s Apollo Moon Program and was also the program manager for the Space Shuttle software.

Responding to continuing public interest in space and space travel, Clemons speaks throughout the mid-Atlantic about the Apollo and Space Shuttle programs and on why science matters. And he appeared as himself in the “Command Module” episode of Moon Machines, a six-part documentary that aired on the Discovery Channel.

In the 1980s, in tandem with his scientific and engineering work, Clemons began writing short fiction and science fiction. Several of those stories have been published and anthologized, and his science fiction novel Over Old Ground is also in the hands of his agent. In 2016 he began a memoir of his time in the heart of America’s NASA space program. Focused on his work at the Johnson Space Center in Houston, the book – entitled Safely to Earth: The Men and Women Who Brought the Astronauts Home – is slated for publication by the University Press of Florida in the fall of 2018.

Clemons is excited that the Division’s Artist Fellowship will enable him to direct more of his work and energy toward expanding his fiction and nonfiction writing and bringing his Delaware novel to publication.