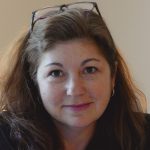 Jen Epler grew up in Dover, near the former General Foods plant, and she still remembers the sweet smell when they made chocolate pudding. Though she’s lived and worked in other places, she seems to always return to Delaware.

Memories – and the mysteries that surround them – play an important role in Epler’s work and in her work ethic. Especially moved by the struggles of her grandmother’s early 20th century life, the writer has been working for a long time to honor her grandmother’s experience in fiction not by trying to write her grandmother’s story – Epler now knows this is impossible – but by trying to imagine her way into the mind and heart of a fictional character who came of age and raised a family in a similar time and place.

There were few in Mildred Goodhardt’s circle of friends and family whom she actually liked, much less loved, without obligation. She just couldn’t (and yes—she had tried) summon a kind enough word for those who hovered close, for those with whom she shared her life.

Most recently a co-founder and co-coordinator of the 2017 inaugural Wilmington Writers Conference at the Delaware Art Museum, Epler also facilitated writing and healing workshops in Sussex County. She received her master’s degree with distinction in English from the State University of New York at Potsdam and is a graduate of the University of Delaware, where she studied Russian and Political Science.

A resident of Wilmington, Epler has shared her wordsmith skills and love of writing by working with students as an English instructor at Delaware Technical Community College. She has also worked for several agencies within the State of Delaware.

She is especially inspired by these words of James Baldwin, “I know a lot of talented ruins. Beyond talent lie all the usual words: discipline, love, luck but most of all, endurance.” When clearing out storage boxes recently, she was surprised to discover that she, too, has endured. “I realized that I was writing, or attempting to write, much earlier than I originally thought.”

In 2016, Epler received an Individual Artist honorable mention (fiction) from the Division, so this year’s award is especially meaningful. “The DDOA Fellowship means that what you are doing has value . . . It means keep going.” Award funds will increase her opportunities to study, work with mentors and continue to plumb the mysteries of her grandmother’s story, a tale that “despite hours and hours of research and interviews, remains hidden in stingy memories . . . or buried amongst the dead.”