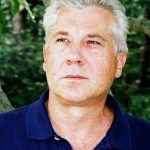 Poet David Kozinski has created visual art since early childhood. He was inspired by the visual and intellectual milieu around him during teenage summers in France, but had no easy access to art supplies, and “writing materials were always at hand.” So he created poems, beginning his life-long writing practice.

Kozinski grew up in Wilmington, part of an accomplished musical family, so melody and cadence are deeply embedded in his poems. His work is filled with harmony and counterpoint, but unlike music, writing mandates that only one voice can speak at a time. So he works to incorporate patterns of contemporary speech and the “syncopation and cross-rhythms found in jazz and other musical forms.”

was the other side of the moon
—unmapped, unexamined —place of promises
and answers, face known to Braille readers and
insomniac children,
articulated by sure fingers
and unacknowledged fears.

Though he sees the world philosophically, with an existential or skeptical eye, his poetry – usually in free verse – is accessible and expansive, with wide-ranging influences and many sources of inspiration that include reading great poetry, nature, music, visual art, and professional and college sports. He also values feedback from the members of his critique circles, whom he considers in many cases to be on equal footing with the greats. And he continues to create abstract visual art, exhibiting regularly in Philadelphia and around the region.

Throughout his career, Kozinski has been a dedicated mentor, believing that “the mature artist should nourish the artistic interests of others, especially the young.” He has conducted a plethora of writing and poetry workshops in Delaware, regionally and in Philadelphia (where he lived from 1977 until 1993). As a board member of the Philadelphia Writers’ Conference, he works to facilitate interaction among writers and also seeks to connect them with literary agents and editors.

Even with a substantial body of work, Kozinski is honored by the tangible recognition afforded by the Division Fellowship. He hopes to expand his horizons by attending festivals or workshops, assemble a manuscript for a new book, and conduct one – or more – poetry workshops for Delaware young people.