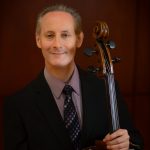 Lawrence Stomberg and his cello have embarked on many musical journeys, beginning in New Mexico when as an 8th grader he first heard – and was captivated by – the Dvořák Cello Concerto. His career now encompasses hundreds of performances across the country and on four continents, a seven-recording discography and a debut at Carnegie Hall. But Stomberg is still on his journey of discovery, striving to “learn new skills, dig deeper into the elements of the music, and further hone my musical communication with an audience.”

A highly praised University of Delaware faculty member, the Wilmington resident graduated from Rice University and went on to receive a master’s degree and doctorate from the State University of New York at Stony Brook. He credits his love of teaching and pedagogical commitment to Marianna Gabbi, an early mentor who encouraged Stomberg and his friends in their love of chamber music. In 2017, he played a concerto under this 89-year-old conductor’s baton, and “it was a wonderful reminder of how much she gave me as a musician.”

Stomberg blogs on his website, and he’s also a photographer, an avocation shared with his father, who built a family darkroom in their laundry room. Musically, he is inspired by cellists like Pablo Casals, Pierre Fournier and Yo-Yo Ma, and by his gifted colleagues. But he also finds food for thought in recordings of Sinatra, Ella Fitzgerald, classic R&B and Motown. “It all adds to my musical inspiration database.”

The “musical database” is expanding lately with a focus on the six Suites for Unaccompanied Cello by J. S. Bach. Stomberg has been studying and playing them, not only in performance spaces but also in underserved areas, recording interviews with those who hear him. In this project, he is also partnering with two composers (in New York and in San Francisco) on companion works for each of the Bach Suites. He plans to interweave the music – both old and new – with these interviews. The Division’s Artist Fellowship will provide financial support for this complex project, helping Stomberg to “build community and dialogue in a society that needs more of both.”