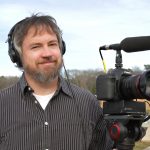 Filmmaker Rob Waters has been telling stories for most of his life. The Wilmington native started making films when he was 10, shooting with a friend’s camcorder and editing on a dual VHS player. But when he went to the University of Delaware, Waters studied graphic design and illustration and planned to become a cartoonist. Filmmaking “just seemed like an unattainable career goal for a kid from Delaware.”

When the digital media revolution made equipment and post-production more affordable, Waters took a leap, and in 2010 he made his first “real” short. A local festival accepted it, and “since then, I’ve been hooked on creating short films.” As much as he loved filmmaking, Waters had never considered doing it for a living. But as his works were screened more frequently, people started asking him to make films for their businesses.

His trajectory toward professional filmmaking took another leap when Waters won a 2014 national short film contest. After the screening, a competition judge told him he was meant to be a filmmaker and he should do it full-time. That advice gave Waters “the push I needed,” and so he created a successful Sussex-county production company. W Films is based in Lewes, where he lives and works with a group of like-minded artists and technicians.

A child of the 1980s, Waters found inspiration in the works of film legends like Stephen Spielberg and John Carpenter, and so this year he is planning to achieve a life-long goal – creating his first feature-length film. In addition to the validation that it provides, the Division’s Artist Fellowship will help Waters to purchase a drone for that production.

He plans to set the film in a small coastal Delaware restaurant during lunch hour. “Each table will be its own play written by a different Delaware writer, and the waitress serving them will be making her own journey throughout the film.” A long way from telling tales in his back yard, Waters is now taking his own journey through his films.