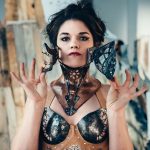 During the summer, artist blacksmith Ellen Durkan travels and teaches blacksmithing classes all over the country. But at any other time, she can be found in Delaware at her Iron Maiden Forge, sculpting the forged fashion that has become both her trademark and her passion.

Durkan was raised in Wilmington as the oldest of nine children: “It didn’t take a village to raise us; we were a village.” She studied and trained at Delaware College of Art and Design (in Wilmington and then in Washington D.C.) and received an MFA in sculpture from Baltimore’s Towson University.

Though she worked in metal sculpting during her school years, Durkan took a blacksmith assistantship one summer at New Jersey’s Peters Valley School of Craft and was “pretty much hooked after that.” Her early forged work (influenced by clothing designer Alexander McQueen) began with stationery dress-form like structures that evolved into her current practice – creating metalwork designs for the human body.

Durkan’s intriguing sculptural creations often pose psychological questions of trust, power and vulnerability: Though the metal pieces make the wearer feel strong, “they offer no physical protection like traditional armor.” And she is consistently challenged by manipulating the metal to allow it to sit correctly and comfortably on the human body.

Durkan’s work has been seen in over 40 solo and group throughout the United States and worldwide, including a dozen fashion runway shows here and as far afield as Paris and Sydney.

The accomplished sculptor also teaches yoga and enjoys travel, but basically “I’m always making art or plotting to make something.” In 2011, she was named a DDOA Emerging Artist Fellow, and her current Established Artist Fellowship will allow Durkan to expand her tooling and make larger pieces out of different metals. She also plans to create and mount another performance-art-based fashion show, looking forward to “the excitement when I lace another person inside the piece, and it takes on a new voice.”