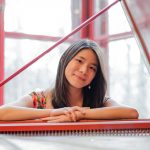 While studying engineering at the University of California at Berkeley, Joyce Chen joined the University Baroque Ensemble and fell in love with the harpsichord. Now with both a B.S. in mechanical engineering and a doctorate in harpsichord performance, Chen finds that the scientific and the musical are still deeply intertwined, “such as the mathematical relationships between tuning and intervals.”

The Wilmington resident grew up in Taipei, Taiwan, where – as many young people there – she studied piano and violin from an early age. Greatly influenced by her teachers of both instruments, she continued to study and play seriously. But for her, music has been more than an inspiration. It’s a centering practice that has enabled her to overcome hardship and obstacles.

As a harpsichordist, Chen (who is also versed in music history and theory) has been mostly educated in “historically informed performance practice,” the attempt to re-create music as it would have been heard when it was written. The harpsichord is most often associated with Baroque and early music of composers like Bach or Couperin, and it has a unique timbre due to that fact that its strings are plucked rather than struck like those of a piano.

But Chen is also exploring contemporary music. In addition to the standard harpsichord repertoire, she is a proponent of new music composed for her instrument. Her doctoral degree recital consisted entirely of recent harpsichord works, and her Artist Fellow submission featured several challenging new compositions. In exploring contemporary works, especially those composed by women, she seeks to “break the imbalances of the western musical canon as well as inequality of gender, race and other social issues.”

In addition to her work in Delaware with Brandywine Baroque and other ensembles throughout the region, Chen has concertized from New York to California, seeking to make her music accessible and affordable. On a personal level, she finds that music is a great outlet for her emotional health and a source of healing.

The award will help Chen pay for a new harpsichord, an instrument upgrade that will allow her to practice and play most harpsichord repertoire and experiment with various timbre options. And as she shares her gifts through scholarship, study and performance, she hopes to inspire others to use music as a force to combat hardships and add meaning to life.