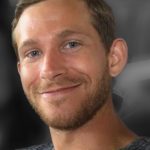 Sculptor Kevin Bielicki makes works – often monumental, large-scale ones – that exist on the wall. But they often cascade off the flat plane and into the space of the viewer. And as they do, the sculptor creates waves of movement, an exploration of the intersection between painting and sculpture. As well, his work that features ribbon-like forms utilizes their repetition to express both movement and the passage of time through space.

Bielicki creates often in wood, citing the importance of both the natural world and abstract impressionism in his exploration of form and space. His indoor works often spill and spiral off the wall to define large swaths of territory. And unlike many sculpture, their modular nature allows them to be re-installed in different configurations that are able to respond to and inform each new space.

The artist also works with vines, roots and other natural forms, juxtaposing them with hard-scape materials to explore the contrasts. In addition to his fascination with “the vast scale of nature and the universe” apparent in both indoor and outdoor works, Bielicki is also surprisingly influenced by the small, delicate and intimate forms of bonsai. This Japanese practice – the creation of flora in miniature – explores and seeks to refine the essence of the plant world, and Bielicki’s experience with the delicacy of this art form directly impacts his larger works.

Now living in Newark (where he grew up), Bielicki received his MFA from the Herron School of Art and Design at Indiana University. His studies included attending Wilmington’s Delaware College of Art and Design, and he received both a BFA and an MAH from the University of Delaware. Throughout ten years of professional artistic practice, the artist has had three solo exhibitions and been featured in over 30 group shows nationally, included in showings at the Delaware Art Museum’s Centennial Juried Exhibition and London’s Brick Lane Gallery Annex. His commissioned work is on view in Delaware and Indiana, and he has participated in a dozen curatorial or collaborative projects.

With his DDOA Fellowship award, Bielicki plans to expand his current practice by investing color into larger format works. Also a painter inspired by geology and plate tectonics, the artist plans to create a series of paintings inspired by his sculptural installations.