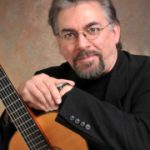 When Christiaan Taggart was growing up, he thought the guitar was magic.

“You can’t do this,” he recalls thinking about the instrument’s sounds. “You can’t make it do those things.”

Taggart, who for more than 20 years has taught classical guitar at the University of Delaware, has spent his life exploring those possibilities. He played rock, often the first foray for guitarists into ensemble music, for years.

“But then to hear all that stuff with drums and a singer and a bass player,” he says, “I just thought it was magic.”

He loves the instrument’s versatility. But most presenters, Taggart says, “if they hire the guitar, then that’s all they hire. And so I don’t have a chance to do anything with other players.”

He has a partnership with Eileen Grycky, a flutist who this year won an established-artist fellowship from the Division. But “having the grant allows me to put together an ensemble of other instruments to work with guitar.”

“Music, it’s all becoming one,” Taggart says. “And I don’t see that happening with any other instrument. We’re not stuck in the 19th century on the guitar, and that’s just so wonderful.”

Excerpt from Grand Potpourri, Op. 126 for flute and guitar by Mauro Giuliani. (performed with Eileen Grycky on flute).

He has noticed “a very slow explosion” fueled by fresh guitar classes at schools. But the term “classical,” he says, doesn’t represent the breadth of what he plays.

When he first won a Division grant, he hired the Villa-Lobos Sextet, which in part brought a flute, a clarinet, a cello and a harp to the guitar’s side. This year, as the winner of the master’s grant, he plans a similar concert—without the grant, he says, it’s not worth even mulling the possibilities—and separately is commissioning a composer for a new piece.

“I’ve gotten so much from guitar, that I think to commission music, it’s always fun to work with a composer and to see what they come up with,” says Taggart, who during his career has commissioned three other works.

But he might never have become so enamored with the instrument had his first teacher been less aware of the effects the word “classical” can have on young ears.

“Had my teacher told me he was teaching me classical guitar when I was 12, I probably would’ve quit,” Taggart says. “I wasn’t interested in something that said that. But he never told me. I didn’t know. And I don’t like to use that phrase, either, because there’s so much else to contemporary music.

Students of his, he says, have won Division fellowships. But some of the most telling moments of satisfaction for Taggart come with an activity he assigns early in the semester.

“I think it’s always fun for me to see someone’s reaction to what the guitar can do,” he says. “I teach a couple of classes of beginner students at the university, as well, and I insist they all go to a classical guitar concert. Of course, they want to know why, and I say, ‘Well, who in class has been to a classical concert.’ And no one in classes raises their hand, and I say, ‘Well, that’s why.’

“And almost to a person, the reviews that they write, they’re just amazed. They had no idea.”

Today, he is virtually inseparable from his magic instrument.

“The question used to be, ‘Well, how often do you practice?’ Taggart says. “It’s just part of my life. How often do you spend time reading? How often do you watch a movie?… You do it when you’re not doing something else. Even while I’m teaching, I’m playing the whole time.

“It’s really the most fun job in the world.”

Taggart, who lives in Newark, was awarded the prestigious Masters Individual Artist Fellowship in 2009 from the Delaware Division of the Arts in the Music-Solo Recital category.