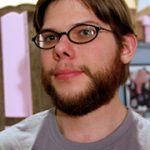 Reading this story isn’t enough. To better understand Ronald Longsdorf’s sculptures, you must experience them—see his peculiar creations, equal parts reality and fantasy; watch the videos or projections that often accompany his work; listen to the sounds that give them life.

Step into a room occupied by Longsdorf’s “You Are So Sensitive (And By You I Mean Me),” where two complicated systems of PVC tubes merge at either end of a green bathtub. From the end of one tube system, a speaker sends Western music—a song by the band Why?—rushing through the tunnels, around its bends and into the tub. From the end of the other system, a speaker pushes Eastern music—”The Song of Unrequited Love,” sung in the Tuvan throat style—through a plastic maze of its own, into the tub.

The sounds crash and bounce within—it’s a metaphor, says Longsdorf, who works at the Delaware Center for the Contemporary Arts. Western and Eastern cultures, starting elsewhere, moving through unnecessarily twisted corridors, finishing in the same place.

He also has created a room—complete with furniture and the bottom half of a staircase—entirely out of insulation boards. Longsdorf, of Wilmington, likes to use either pink or blue insulation in projects. But pink, he says, is more seductive. Pink is more connected to the body.

“When it comes to personifying the objects,” he says, “it’s a way to deal with the body without dealing with the body.”

Such a room, which an artist friend of Longsdorf’s called a “furniture portrait,” looks odd yet functional. But it cannot withstand normal use.

That’s a theme you’ll find throughout the 26-year-old’s work: Things appear real, seem to have a purpose and invite people to participate.

But always, there is a separation. Things never are as simple as they might be.

Longsdorf, who lives in Wilmington, was awarded a 2009 Individual Artist Fellowship as an Established Professional from the Delaware Division of the Arts in the Visual Arts-Sculpture category.