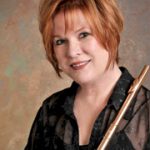 Eileen Grycky’s father died when she was just 5 years old, but he already had imparted on her his love of music. A son of Ukrainian immigrants, he had studied music at West Chester University and had directed a high-school band.

He took her to concerts and hoped she would play the flute and attend the Oberlin Conservatory. Eventually, she did, and she went on to the New England Conservatory in Boston.

“The flute was sort of my pathway to being a musician,” says Grycky, of Wilmington. “I fell in love with music as a young child, my father taking me to concerts. “It’s a difficult career. Sometimes, I actually wish that I had done something that contributed more to the world. But it’s just a tremendous passion for me, and I feel I’ve been extremely lucky in my career.”

She plans to put her Division fellowship grant toward a commissioned piece by Michael Dougherty, a well-known composer who teaches at the University of Michigan, in honor of her friend and former colleague Carol Brown Beste, who died three years ago. Dougherty, who went to school with Beste, is writing a five-minute solo for the flute. (His work is expensive; five minutes is all Grycky can afford. Beste’s widower also is contributing to the commission.)

Excerpt from Grand Potpourri, Op. 126 for flute and guitar by Mauro Giuliani. (performed with Christiaan Taggart on guitar)

Grycky has a busy career. She is the flute professor at the University of Delaware, where her counterpart in a flute-guitar duo, Christiaan Taggart, also teaches and encouraged her to apply for the fellowship.

She also is a member of the Delaware Symphony Orchestra, the Opera Company of Philadelphia Orchestra, the Brandywine Baroque Ensemble and the Del’Arte Wind Quintet.

She’ll perform a selection of pieces later this year at Gore Recital Hall at the university. The grant also will help her pay for another recording with Taggart.

No one genre defines her repertoire. Perhaps that’s why she’s retained her passion throughout the years.

Grycky, who lives in Wilmington, was awarded a 2009 Individual Artist Fellowship as an Established Professional from the Delaware Division of the Arts in the Music-Solo Recital category.