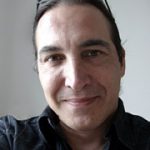 Memory is selective. Fragmented. This, Ronald Brignac believes, and this he photographs.

He thinks of it as collecting—we go places, we have experiences, and not all of it stays with us.

“And in photographing, I’m trying to do a similar thing,” says Brignac, of Wilmington, “where I’m selecting pieces of the environment that I find relevant for me in terms of describing the space, or just that I find interesting, or things that the person who occupies that space thinks that they find to be important to them.”

In each of his panoramic, composite prints, Brignac, the area coordinator of photography for the Delaware College of Art and Design, digitally merges several images, each created with exposures of several minutes, each featuring objects and subjects lit by a flashlight Brignac directs.

He’s been doing this in color for about six years, but Brignac first practiced the method with black-and-white film in the 1980s. The process was intensive, requiring many hours in the darkroom and printing.

“And that actually informs how I do these now, working on the computer,” he says.

A period of about six years separated his black-and-white panoramas from his digital color work. A client traded with him a digital camera—a Canon 20D—as his commission.

“I knew that when digital started to come around that I was going to be able to revisit this,” Brignac says.

He likes to talk about time, about its passage and the unique residue it leaves on individuals. The camera is, he says, by its very nature objective. People, on the other hand, scan and collect.

Brignac, after making each photograph, will “go back later and reconstruct this in whatever way I feel is appropriate at the time—not unlike describing an experience that we had somewhere. I don’t grab everything. I grab whatever resonates with me. And in that description that I would give back, it’s not linear, it’s just how it comes out.”

It’s his way of altering reality to reflect his reality. It allows viewers of his panoramic photographs to see through his eyes.

Brignac, who lives in Wilmington, was awarded a 2009 Individual Artist Fellowship as an Established Professional from the Delaware Division of the Arts in the Visual Arts-Photography category.