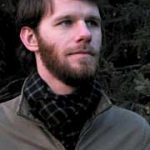 For the past several years, his style has fluctuated through different types of abstraction.

Then he moved toward landscapes, but looking now at those works, Ruszkowski notices the encroachment of geometrical shapes he placed above the horizons.

“Looking back now,” he says, “I can see the transition happening without my control. I think it was a push for me to better understand what I was working with. At the same time those things were coming together, I was becoming more interested in the historic research I was nerding out on.”

Historic buildings of his native Northern Delaware had captivated him. And they have figured in his most recent work.

Lately, Ruszkowski, of Hockessin, has been focusing on capturing the process of a painting’s creation—a kind of deconstruction of the structures in finished works, “treating them like ghosts.”

Sometimes, the buildings appear half-imagined, their outlined shapes empty, a web of long, thin lines drawn by pencil to guide every angle of the structure.

In others, the soiled white silhouette of a building’s profile is set against a smudged wood panel.

“Rather than creating a photorealistic representation of these historical buildings, I’m trying to create a softer image of them—sort of like an old photograph,” he says. “Definitely with that tinge of romanticism, but I’m hoping that they’re turning into something a little more interesting in the way they’re created, also.”

To that end, Ruszkowski has kept in mind a local tradition of watercolor and the subjects of the Wyeth family of artists.

“I’m trying to be aware of those modes of working,” he says, “and there’s definitely a relationship to my interest and that realm of art. But I’m trying to break things down more.”

With the Division’s grant, Ruszkowski will work toward creating three-dimensional wall pieces that comprise drawing, painting and the installation of materials such as string, along with projections.

Ruszkowski, who lives in Hockessin, was awarded a 2009 Individual Artist Fellowship as an Emerging Professional from the Delaware Division of the Arts in the Visual Arts-Painting category.