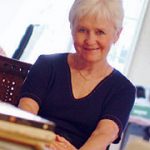 It all happened so fast.

In the fall of 2000, soon after Elizabeth Dolan completed a course about memoir and fiction writing, her sister died.

Not long afterward, her granddaughter was stillborn.

I can still taste the butter-smothered flat bread
Aunt Maggie, her fingers prickled from churning,

conjured in Kilcoo. Any bread I have ever kneaded
was as pulpy as peat or arid as wool.

I wonder why I cannot master this age old art.
Have I veered so far from my need

to press my essence into water and flour
and nourish the ones I cherish? Last night

named for the bishop who founded
Cork City. As my mother showed me

now I show Finn how to cut the rolled dough
into circle with rim of a glass.

On the day of the infant’s funeral, Dolan’s mother died.

Elizabeth Dolan was, she says, “paralyzed.”

Her practice with memoir and fiction writing suddenly didn’t apply.

“I didn’t have the concentration, the energy, to write anything long,” she says.

Poetry seemed more inviting, and Dolan shifted her attention to it as spring approached.

“It was almost as if the world was joining my grief,” the 68-year-old Dolan says.

She grew up in the South Bronx near a church whose bell she could hear from her home. Many of her relatives have remained in New York, but Dolan since 1996 has called Rehoboth Beach home.

The Lady of Annie B Street is Gone

Ninety-five-year-old Nellie Mulligan,
an amber-eyed munchkin,
outspoke her preacher husband
by fifteen hundred Sundays. Still dead-
heading her portulaca and roasting
green peppers from her garden
until her hard-of-hearing son
whisked her from under the canopy
of copper beech, each planted at the birth
of a child. He sold her helter-skelter house
the walls still battle-ship green,
their holes stuffed with Wrigley’s.
Then he died six months later
leaving Nellie rudderless. Shipped
to a nursing home where she pined
for sea gulls shrieking,

Two daughters and nine grandchildren live on the next block. Such proximity to family fuels Dolan’s creative reserves.

March Street Press soon will publish Dolan’s first book, “They Abide,” a collection of poems about the childhood experience. Her next manuscript is longer, and the Division’s grant will help Dolan pay the fees that many presses charge for consideration.

She has had a level of success in other genres, but it’s poetry she loves.

“Maybe it fits my life better,” she says.

Dolan, who lives in Rehoboth Beach, was awarded a 2009 Individual Artist Fellowship as an Established Professional from the Delaware Division of the Arts in the Literature-Poetry category.