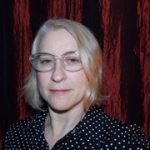 There is no glancing at Karoline Wileczek’s drawings, especially when the subject is a firefly. A glance at a piece such as “Firefly Signals,” whose background of alternating dashes and circles serves as a playground for a few dozen busy winged insects, leads the eyes to hopscotch about the page.

It seems to reflect Wileczek’s recollection of the sort of experience that inspired it.

“If you try to watch a firefly and where it goes at night, it disappears,” she says. “It’ll appear, it’ll disappear. Where is it next? You dart your eyes around. That kind of process, I think, is a different way of expressing reality.”

The drawings she submitted as part of her “Close to Home” project explore natural elements from near her home in Newark and in the surrounding area.

“I capture, sometimes, memories in my work,” Wileczek says. “It’s like a recording of the specificity of living.”

Rather than render direct drawings, however, she invites her imagination to introduce varied processes into the drawings, “creating new contexts,” she says, “through an invented element, symbol or different media.”

She has a high respect for the range of methods and media other people are using – indeed, Wileczek has a master’s degree in painting from the University of Minnesota and since 2000 has owned Tributary Arts, a fine arts and crafts business – but she made her recent works with only graphite and charcoal on paper, fundamental materials that have been used for centuries.

Knowing that she will draw, Wileczek says, sparks her curiosity in all that surrounds her.

“It’s my favorite way of finding out about the world,” she says. “You’re focused, so your attention is drawn into the work. And you have a life to draw from, in terms of what you could possibly put on the page. I think it sharpens awareness.”

Wileczek will exhibit her “Close to Home” series and some new drawings in a solo show called “From the Quiver,” at the Gibby Center for the Arts’  Hudson Contemporary Gallery in Middletown, May 14-June 13, with a reception on May 15 from 6-8 pm.