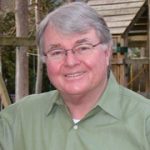 When Russell Reece was in college, he loved to write. The Navy veteran was pursuing a technical degree, but his heart lay on the page. He wrote many stories, and two English professors encouraged him to pursue a career as a writer.

Reece considered himself practical, so he chose what he considered the more practical route. Besides, he told himself, he could continue to write in his spare time, after he had graduated and gotten a job.

“I really did intend to continue to do it,” he says. “And I wish I had. But I didn’t. I had good intentions, but things got in the way, and I just stopped writing altogether.”

Career and family intruded on his promise to himself.

“I always imagined myself as writing,” says Reece, 69, “but I never did it, because I was too busy or too lazy or whatever. But I finally started again, and I started because I kept saying, ‘I’m almost 50, and I haven’t written yet, and am I gonna be a writer or not?'”

He recalls staying after work in the late 1990s, clearing his desk and spending a couple of hours writing, trying to reinvigorate his creativity – “actually,” he says, “I remember writing three or four pages and then throwing it away and thinking, Well, this isn’t any good. But finally, I kind of got in a regimen where I just started writing.”

Bass Fishing on the Mekong

The sun hovered over the sweltering Mekong Delta as our landing craft snaked up a jungle-lined tributary. Under the drone of the diesel engine we searched the edge of the tangled shoreline.
A pilot had reported seeing two bodies in this area. Wardel, Jenkins and I were with the Army Graves Registration unit out of Qui-Nhon and had been sent in to recover them. The gunners-mate, the boat coxswain and the ensign were Navy, attached to the landing craft, USS Sussex County, on station nearby in the Mekong River.
There had been heavy fighting in this region over the last couple of months and it was now designated as cleared of enemy fighters. But as the stream narrowed and the jungle loomed over the water you had to wonder just how they knew that. Everyone in the boat was on high alert. We came around a bend and the coxswain pointed, “There they are.”

While he was vice president and chief information officer at Playtex Products, Reece wrote whenever he could fit it into his schedule. Upon retirement, in 2007, he developed a habit: he says he has written for three or four hours every day since.

He devotes the morning hours to writing – a typical session begins around 7:30 and lasts till noon. He’ll sip coffee and listen to a CD of blues or jazz, instrumental, so the only words floating about his head are his own. Reece, of Bethel, primarily writes short stories – his “Bass Fishing on the Mekong,” a fictionalized account of an incident he experienced while stationed on a landing craft in Vietnam in 1965, was used as the first story in an anthology called “Remembrances of Wars Past” – but he has written a novella (titled “Lenny’s Farm”) and a novel (its working title is “At Birdsong”). The fellowship grant, he says, will help him finish to his satisfaction one of the two books.

“I was happy in my career,” Reece says, “but there was a creative element that wasn’t being satisfied. I used to build houses and do renovations. I used to do a lot of things to try to get some creative energy working inside. Looking back at my career, it’s taken me a long time to get to the point where I feel like I’m really in the groove as a writer, and I don’t feel I’m there yet. I’m still working at it. I realize it takes a long time, and it takes a lot of work. You gotta write a lot of stuff before you start to feel like you’re equipped to be a writer. I wish I had started earlier. I really do.”

He and Barbara Gray, a 2015 fellowship recipient for fiction, plan to read from their work in November at the Newark Arts Alliance, with details to be determined.