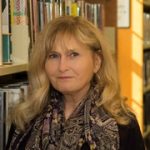 “I enter a story through an image,” Billie Travalini says, and the one that led her into the second of a two-volume memoir brought with it the potential for a powerful metaphor.

She thought about the times when her biological father would bring home a chicken and kill it in the basement. He would cut off its head, and the chicken would keep running. The image stuck with Travalini.

“As soon as the image came in my head,” she says, “I knew that it would be part of Chapter 1, because it’s the perfect metaphor for a child who is voiceless and has nowhere to go.”

Travalini, who submitted the memoir’s first volume, “Blood Sisters,” with her application for the Division’s fellowship, calls Volume 2 “Rules to Survive Childhood.” Sharing her story, she says, is her way of giving readers a chance to step into the life of an unwanted child.

She counts herself among “the lucky ones” because at birth she was placed with a loving foster mother, whom she calls Mama Cope.

“Nothing – not even being ripped from my home and forced to live with my abusive biological father – could undo the strong sense of self Mama Cope had given me,” she says. “This, above all else, is my inspiration for writing.”

Travalini, who also earned fellowships from the Division in 2005 (poetry) and 2007 (fiction), sees herself as “a filmmaker with a pen, a fan of close-ups who strives to give voice to those who were once left out of the discussion.”

The driver’s name was Woody Hicks. He lived next door to my real mother and my real father. The garbage truck we were riding in was his. And I was going home. None of which pleased me.
“The missus sure seems nice.” The driver didn’t know Mama Cope and I resented his sliding in some comment like he did. I pushed myself closer to the door and stroked Sissy Jupe’s big, orange head. “My pretty kitty,” I said, cutting him off. Sissy was sleeping in the folds of my pinafore, hiding the pink tulips that Mama Cope had embroidered into the shape of a heart. Mama Cope was my foster mother. When she put my suitcase on the seat next to the driver, she straightened my ponytail with her long, soft fingers. Then she told me to be good and promise I wouldn’t be stubborn. I did, but she knew I was hopeless so she just gathered me up in her arms and laughed.
“Just don’t go getting yourself in any trouble,” she said, pulling a hankie out of her pocket and dusting the tops of my new pink leather shoes. “I hope to visit real soon.” Then she let go and I could see her eyes filling up with tears.

But creativity, for the writer trained in journalism, does not trump accuracy.

“I see all writing, perhaps nonfiction the most, through the eyes of a scientist or a mathematician,” she says. “When I approach a story, I go with the idea that one and one has to equal two. The sentences have to flow together. They have to make sense. So there’s a mathematical thing going on in my head. Just as physicists and mathematicians try to make sense of the world, I believe that’s what writers try to do.”

Opportunities abound to see Travalini read from her work: she will read and be keynote speaker at the “Take Back the Night” evening and Family Violence Resource Networking Conference, in Lancaster, Pa. (April 14-15); Dreamstreets Downtown at the Chris White Art Gallery, in Wilmington (3 p.m., June 20); the 8th annual Lewes Creative Writers Conference, at the Lewes Public Library (6 p.m., Aug. 21); and at LOMA, in Wilmington (5:30 p.m., Nov. 6), where she and her cousin, Chuck Toppin, will present an interactive reading and photography Art Loop event.