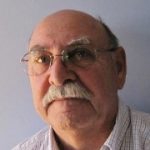 These days, James Ulry pursues his passion for art without reserve – when on a cruise with his wife that took them through the Panama Canal, for instance, he spent parts of 15 days folding paper from brochures and magazines in preparation for a uniquely crafted piece he would name, appropriately, “Traversing the Panama Canal.”

He volunteers nearly full-time as a pottery studio technician at the Dover Art League. He’s a member of its board of directors now, but the title that seems most apt also is the least formal: working artist.

Ulry had formal training, including a master of fine arts degree in ceramic sculpture and painting from the University of Missouri at Columbia. He had a career in art education, having taught junior and senior high school classes and, at the college level, courses in ceramics, 2- and 3-dimensional design and drawing.

But a divorce and other personal matters, Ulry says, kept him from most creative pursuits from 1995 until 2012, when he and his current wife, Billie, retired and moved from central New Jersey to Dover. Since then, he has joined two other art leagues (in Rehoboth and Milford) and participates in member and juried exhibits.

“They say you always pick up where you left off,” Ulry says. “So I had to go back and find out where I had left off.”

When he and Billie first moved to Delaware, they lived in a small apartment while waiting for their home to be built. He didn’t want to get into painting or any other medium that might mess up the place. He wanted to work with something inexpensive, which led to a fascination with commonly found paper and cardboard products – junk mail, newspapers, magazines and fliers, for example.

“I found I could fold papers,” Ulry says, “and use the colors from print, such as magazines and sales ads, to create designs and compositions. So that’s how that began, just out of necessity, more or less.”

He manipulates the paper, cutting, folding, rolling, gluing or perhaps attaching it with metal hardware into multi-dimensional, textural compositions. Once he’s created a work, he typically sets it within a shadowbox frame.

“For the most part,” he says, “the theme, subject matter and/or final visual image is a result of experimenting with and creating a uniquely personal vocabulary of artistic elements. For example, linear texture may be created by folded edges of newsprint – black letters on a white ground – or a broad pallet of color taken from cutout swatches of colorful sale ads.”

Ulry will show his work throughout October at his second home, the Dover Art League.