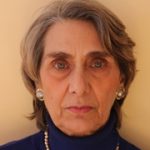 It was her story about a peculiar sort of brush with death that first impressed Judith Catterton’s fellow writers. Until that time, she hadn’t much considered even becoming a writer.

Now 70 and (mostly) retired, Catterton practiced law in Maryland and Washington, D.C., for more than 30 years. She primarily did criminal work, first as a prosecutor, then as a defense attorney. She and her husband, a retired architect, moved in 2000 to Rehoboth Beach. Only then did she start writing anything other than legal work.

She was at a bookstore in 2004 when she met Maribeth Fischer. They started chatting. Fischer, a 2014 Division fellowship winner, was in the midst of launching the Rehoboth Beach Writers Guild. She also mentioned teaching a class about writing memoirs.

Catterton’s husband had started writing what could have become a memoir, and she suggested to him that he attend; they decided to go together.

“I know a lot of lawyers who think they have a novel in them,” Catterton says, “and I know some lawyers who’ve written novels. But I’m not one of them. I never felt like, Oh, I’ve gotta leave the practice and write.”

She was, she says, her husband’s tag-along at that first class.

“Because of an assignment that Maribeth gave us in this memoir class,” Catterton says, “I wrote about my last visit with my death-penalty client, before he was executed – my sort of ‘goodbye’ visit. I had never written about it before. I had taken a lot of notes and, to be honest, I thought, Maybe one day I’ll write about this experience. … So I wrote this piece, and I guess I can say it was well received. I read it, and at the conclusion of the reading, Maribeth said, ‘You have a memoir in you. You have to write about these things.'”

That’s when she began to think, Maybe I do. Maybe I should.

“Those of us who do trial work love to tell war stories to one another,” Catterton says. “So I was accustomed to storytelling, but not writing it down. What Maribeth began to show me was that you could change the voice and the tone to those stories and make it appealing for people outside the practice of law.”

“I started taking classes, and through critiques I learned that there’s a different way to tell those stories, where you begin to get personal about it. I began to see connections between the story in the courtroom and my growing up.”

There’s a sleek, metallic, ultra modern set of Nambe salt and pepper shakers in a small cardboard box on the top shelf of an upper cabinet, left of the sink in the kitchen, in an apartment in Almunicar, a resort town in the south of Spain. From the seventh- floor balcony off the living room you can see a two-lane road, a narrow rocky beach and then beyond, the pure blue waters of the Mediterranean Sea.
The apartment is small, consisting of a living/dinning area, one bedroom, a Pullman kitchen, and a bathroom. The furnishings reflect the artistic taste and thoughtful planning of the owners, Walt and Bette T. I can see them shopping for the rust-colored ceramic candle holders, the blue, woven place mats with matching linen napkins, the brown leather chair, and the Swedish modern reading lamp. I can almost hear them debating where the perfect place within the apartment for each item might be.
Five years ago this September, my husband Ken and I spent a month in Spain in celebration of my sixtieth birthday. Walt and Betty were supposed to go with us, but then Walt had surgery on his hip, making his presence impossible. Walt, having organized trips to Spain for his landscape architecture students, prepared an itinerary for us that included a stay in the apartment. We ended up spending a week there; cooking our own meals; drinking red wine on the balcony; and drifting in the still-warm waters of the Mediterranean.

Catterton, an active member of the Rehoboth Beach Writers Guild, submitted with her fellowship application an essay regarding her college roommate and friend of 50 years, who died suddenly after cosmetic surgery.

She’s writing a memoir that comprises a series of essays that focus on her legal career and explore issues related to being a woman in a male-dominated environment, including the difficulty she experienced in trying to balance having both a career and a family.

Chapters will juxtapose her experiences in the courtroom, she says, with other life events, such as the death of her father and mother; the suicide of her nephew; her early life as a tomboy; and her encounters with anti-Semitism.

“I believe I have evolved as a writer,” Catterton says, “learning how to create scenes and find in my experiences feelings that will resonate with others. I want my writing to be more than simply a collection of anecdotes. I hope people will read my work and say, ‘I remember that feeling. Yes, I went through that as well.'”

She and Gail Comorat, a 2015 fellowship recipient for poetry, plan to read from their work in October at Dogfish Head in Rehoboth.