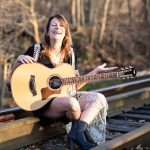 “Every day I try to find a new sound with my music. My professional philosophy: Play music, anywhere, anytime, with anyone!” — Shelley Kelley

Entranced by music from a very young age, Shelley Kelley started with the clarinet and soon added the guitar. Then while attending the University of Delaware, she discovered Celtic and folk music, and she quickly expanded her instrument repertoire to include the pennywhistle, scrub board, triangle and hurdy-gurdy. It’s this last instrument for which she became known on the folk circuit, leading to her 2013 Division Emerging Artist Award.

That award “gave me a voice for artistic inspiration in Delaware and beyond,” and – embracing her musical philosophy – Kelley began to widen her style, also adding song writing and lead singing to her performances. She now has issued a 2017 EP that received national radio play, and she continues her appearances at concerts and festivals.

As a youngster, she “had my ear glued to the radio,” and she also felt the energizing power of playing in a group through her work with the marching band. Currently, Kelley is most inspired by groups that “smash traditions together to create new folk music.” The eclectic musician also loves Klezmer music, Americana artists like Lucinda Williams and venerable singers like Mavis Staples.

As well as making music, Kelley loves to play and spin it – since 2000 she has been a DJ at WVUD 91.3 FM. On Wednesdays, she’s at the control board and microphone with her morning show called “Java Time.” She is also an avid organic gardener who grows “nearly all of my own food right in my own back yard.”

Kelley has lived in Delaware all her life, except for one year (2016) where she and her soon-to-be husband moved to Berkeley for their music careers. Known for decades on the national folk music scene as Michele McCann, she is newly married to Jim Kelley. So as Shelley Kelley, she is now navigating the dual challenges of “playing music that defies description by genre and . . . [also] making the transition that a change of name presents.”

Kelley plans to use her award to create more music, deepen her national connections and become established under her new professional name. She also hopes to gain recognition for “Rim Rock,” a genre she created to encompass her broad musical style influenced from every rim of the world.