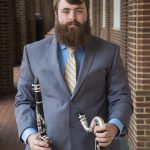 A recent graduate of the University of Delaware with a master’s degree in performance and composition, D.H. Regnier has put down roots in the First State. But he was born in New Hampshire and studied at the University of Southern Maine. So it’s not surprising that as a musician and composer, Regnier has a New Englander’s sense of adventure and independence.

You can hear the geography of his upbringing in one of the works that garnered this award, the wind symphony Landmarks from New England that opens with a sonic portrait of Mount Washington. But Regnier was not always a composer. His instrument is the clarinet – his website features him with two of his instruments. In addition to playing in ensembles, he wrote music “casually” in high school. But he began to write seriously five years ago, and these days he aims to “push my own boundaries as a composer . . . breaking [them] down.”

Regnier likes to explore and experiment with instrument groupings and different sounds. In many of his works, “I have not used key signatures . . . writing pieces without meter or with free meter.” This opens up a work’s interpretive and sonic possibilities, and he has been inspired by a variety of composers ranging from Maurice Ravel and Dmitri Shostakovich to minimilists such as Steve Reich and David Lang. “Breaking from tradition is extremely interesting to me, esepcially when it’s done well.”

Finding the first breakthrough in writing a work can be a challenge. But for Regnier, one of the best things about being a composer is that it provides him the ability to participate in the long arc of creating a work – “ being able to see a piece go from my brain, to the notation software, and then seeing it rehearsed and performed is super rewarding.”

But Regnier is not only immersed in the world of classical music. He also loves progressive and art rock, and he’s a great fan of craft beer, always on the lookout for opportunities to visit new craft breweries. As for the DDOA Fellowship, it presents a new world of opportunities, giving him “the possiblity of getting my music out to more people, hold my own event and celebrate the music I’ve written in the past few years.”