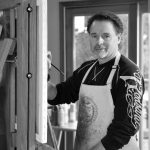 “I am an incurable optimist. I paint to live and I live to paint. My favorite color is blue.”  —  Shawn Faust

Actually, it’s a pretty sure bet that just about every color is beloved by Shawn Faust, whose artistic exploration and continual voyage of discovery is always informed by it. “No matter what object, landscape, portrait or non representational form I am painting, I am always interested in representing it through the vitality of color.”

Born in Maryland, Faust grew up in Newark and has lived and worked in Delaware for over four decades, connecting with the natural world that is readily accessible here. “My work is a manifestation of my relationship with nature and the respect and reverence I hold for it.” An avid outdoorsman, he finds that “experiencing nature with all of my senses encourages my perception of otherness,” critically important in creating the perceptive equine and animal portraits for which he is well-known.

The accomplished and prolific painter has exhibited in hundreds of exhibitions and art shows, won myriad awards and has over 20 major commissions, including Governor Mike Castle’s official portrait (in Legislative Hall) and equine depictions of Kentucky Derby, Preakness and Belmont winners. But in spite of his many awards and a thriving career, Faust continually seeks to expand his horizons.

As a classically trained painter working for nearly thirty years, “my biggest challenge is letting go of control.” So Faust recently pursued an MFA degree and embarked on a new journey – looking at the world from a new perspective and working abstractly. This shift has resulting in his the Alternate Perceptions series, works that were some of his Award submissions, as well as large-scale paintings that require him to constantly reconfigure his studio space.

Faust has another great interest – baseball. He played for a dozen years as a youngster and enjoys coaching his son’s team. In fact, he’s enjoyed the positive motivational technique of coaching so much that “it has sparked my desire to teach art.”

The award will allow Faust to invest more time and resources as he branches out and explores abstraction. He believes that “no matter what you do or what style you are known for, it’s okay to explore all other inspirations,” and the Division’s Award is especially meaningful because it confirms his constant search for diversity and growth.