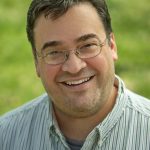 “I have always felt that artists maintain a running conversation with art of the past and present. It is reaffirming to live in the world and respond by making something.” — Daniel Jackson

Daniel Jackson grew up in a house with a darkroom, so “as far back as high school, I was [there] making prints.” Though he studied painting and printmaking – and began his artistic career working in those media – photography “has [always] been a big part of my process no matter what kind of art I am working on.”

His family moved a lot when he was young, but the Claymont resident is happily now “right here in Delaware working on my art.” Currently, he is especially involved in exploring still life, “a genre dedicated to bringing the inanimate to life.” His Fellowship submissions are feature objects rife with cultural meaning – 1960s doll houses, anthropomorphic characters – that Jackson assembles in playful montages and then photographs.

The artist takes joy in being creative, noting that “it almost doesn’t matter what I’m doing – writing, playing an instrument, painting or shooting photos. It’s all the same stuff.” Still, he finds working in still life especially appealing: “The artist’s studio can become a laboratory wherein artist experiments take place [and] nothing comes from beyond the simple collection of options available at hand.”

But a laser-like focus doesn’t limit the scope of Jackson’s influences. Since the 1980s, he has paid close attention to photographers with widely divergent styles, from Cindy Sherman to David Levinthal to William Eggleston. And when photoshop was first developed and came into wide usage, “it made a huge impact on me, [especially] the ethical implication on a medium that was well regarded for its truth-telling.”

The recipient of a Joan Mitchell Foundation grant and a previous Division Fellowship (2004), Jackson feels that “creativity is fickle, and I never know when a great idea is going to come along.” So he is grateful that his award will allow him “a moment to think outside the box, to consider almost anything without the usual real-world constraints.” Jackson plans to try new techniques and expand his artistic practice experimentally in the expectation that the award will “leave an indelible mark on my work.”