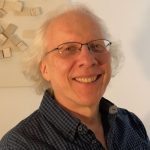 “I think that everyone is an artist within. The important thing is for each of us to figure out how to share our own inner artist.” — Gregg Silvis

Gregg Silvis has come to his visual arts practice via a peripatetic route “with several twists and turns along the way,” including substantial affiliations with academic institutions. For a start, Silvis earned graduate and undergraduate degrees in music and performance in Ohio. Then, after college he worked extensively as a professional musician, playing the challenging instrument of French horn professionally in three Mexican symphony orchestras.

Ready for a career change, he moved slightly north to California, where he acquired a master’s degree in library science at UCLA and took a position as a librarian at University of Southern California. In 1994, Silvis moved to Delaware to take a position at the University of Delaware Library, where he recently retired after twenty-five years. That retirement means that he can pursue his long-dormant artistic impulse, viewing it “as a return to the right side of my brain.”

As a librarian “surrounded every day at work by over two million books on over 10,000 shelves,” Silvis constantly found himself drawn to “the physicality of this tremendous repository of knowledge” where “the actual texts, hidden from a cursory view . . . reveal themselves only to those who choose that one among the many.” So, it is not surprising that his first major visual project – which was also his Division Award submission – explored concrete ways of looking at a text. Great Expectations: de/reconstructed was based on the Dickens novel, and the series was exhibited in 2017 at the University of Delaware.

The vibrant illustrations in the Dr. Seuss book series inspired his first (third-grade) drawings. And Silvis continues to find inspiration viewing art – both in museums and (since he still lives close to the University) in the MFA studios there. “I have many ideas queued up,” and the Division’s award will help him realize some of them.

Having been so involved in music performance early in his career, Silvis is intrigued with musical scores. “A Bach manuscript is a beautiful thing to behold, even if one can’t read music,” and he’s hoping to incorporate written music notation in his visual arts practice. The award will also allow him to the opportunity to develop new techniques – he’s already taken a gold leaf gilding class – and to exhibit and share his work in new venues.