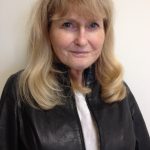 “It is in noticing the smallest of details we are able to see the largest: an interconnectiveness that gives meanings of all things great and small.” — Billie Travalini

Billie Travalini has been noticing things all her life, and not all of them were good. But what she saw fed and nourished a lifelong desire to tell stories, especially those that others could not tell or did not care to notice.

Travalini had a hardscrabble childhood, “where I learned first-hand what it feels like to be voiceless.” She grew up in Delaware City and Wilmington, living with foster parents shortly after birth and later with her biological parents. As a teen with lupus and “fighting to understand a world that punishes abused children, not their abusers,” she was a resident of the Claymont Children’s Home and Governor Bacon Health Center, where “thousands of unwanted children were dumped.”

But words were always her savior. She was a child “who had no voice, but I was one of the lucky ones . . . I could write.” And write she did, constantly. Travalini spoke then – as she still does in her fiction – for those who could not speak themselves. She also threw herself into the world of books. “I read everything I could about Abraham Lincoln . . . also Mark Twain and Charles Dickens, who seemed to get kids in ways ordinary folks didn’t.”

Excerpt: On Hearing My Son was Socrates and my Husband Frank Sinatra (2015)

My son dresses in blue sailor suits. His choice, not mine. The red cowboy boots are his choice, too. Along with the quizzical look on his face.

Not another question. Not now. You know how it is. You’re hoping for an ordinary day. The kind of day you read about in all those Parenting Done Right magazines.

Travalini began her professional career in the corporate sector, but after seven years “I decided finance wasn’t for me,” and she returned to school. After taking a degree in English and Journalism at the University of Delaware and a master’s in Literature and Creative Writing at Temple, she began to teach, and she has never stopped. She’s taught at Lincoln and Wilmington Universities, as well as appearing on panels and in workshops and reading her writing worldwide, telling what she sees and encouraging others to do the same.

“For me it is all about time . . . I never have enough time to write.” She edits and rewrites scores of drafts until “I hear the difference between what sounds good and what is good.” Listening to people and making sense of their behavior is one of the most rewarding things for Travalini, who believes that “sharing our stories can make all the difference.”

The Masters Fellowship will allow the prolific and widely published writer to tell even more tales, “to teach less and write more.” It will enable her to travel to Oregon to “work on a new book with my sister” and possibly delve more deeply into flash fiction, a genre that excites her. She also hopes to complete Rules to Survive, a short story collection and sequel to her 2005 memoir, Blood Sisters.

For years it was an uneasy truce, more a matter of convenience if anyone
was being honest. But honesty had come and gone in the Mills family and no one
had the slightest inkling how to get it back. At home, the parents spoke in the
shortest of sentences to squelch any sign of substance. Yet, in public they were
seen as outgoing, even “blabbermouths” as their daughter, Naomi, liked to say.
Still, if anyone had looked closer, the routine shifting of conversation from the
personal to impersonal would have been obvious.

Even after a lifetime of travel, teaching and worldwide presenting, Travalini is still passionate about her native state. An avid youth volunteer, since 2016 she has also been working to close the circle of her experiences and honor the promise made so many years ago that “the children of Governor Bacon are heard.” To that end, she is serving on Fort DuPont’s Historic Preservation Committee in hopes that the State will acknowledge the children who once lived on the site by including their voices in the conversation. “Life is hard for disabled kids and it only gets harder,” she says, but working with Expanding Options (a nonprofit organization for high-functioning adults with disabilities and their families) helps shape her vision for the future.

To Travalini, “Nothing is more important than being Delawarean. My family has been [here] since the 1700s: Its story is my story.”