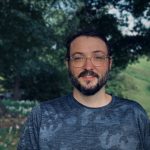 “That’s what’s great about poetry and art in general: there’s always more to learn, your craft is always evolving.”

Though many writers know their path from the start, that’s not the case with poet and writer Caleb Curtiss. He started working right after high school, first in a gas station and then selling life insurance. Eventually he decided to return to Parkland, “the community college I dropped out of seven years prior.” There, he took an American Poetry class taught by Jim McGowan (the highly regarded poet, teacher, and translator) that led him in a new direction and gave him a glimpse at his life’s work.

In college, Curtiss was “still reeling” from the death of his sister a few years earlier, and he believes that “writing became a kind of emotional outlet for me, even if it didn’t deal directly with grief.” McGowan also steered the young man to the University of Illinois’ English Department and its creative writing program, where Curtiss worked under “some great poets.” There, he became enthralled with both contemporary poetry and the classics. He also discovered the world of literary journals and has worked editorially at several publications, including Hobart, where he was poetry editor for four years.

Civically and culturally active in his field, Curtiss has taught numerous university courses and coordinated 37 literary events, including five years as director of Illinois’ Pygmalion Festival. But his writing never ceases: He has also written and published criticism and short fiction and since 2010 has become an increasingly busy published poet, with scores of published poems (25 cited for awards) and invited readings at 30 conferences nationwide and in Mexico.

My son reaches into the refrigerator for a peach. “Ball,” he says.
“Peach,” I say. It is easy to be precious until you aren’t much

of anything anymore. Not long ago in Kunming, China,
they found the fossilized remains of a peach from around 2.6 million

years ago. It was, at some point, all but identical to the one my
son is holding. The moment they unearthed it, swept from it

a layer of ancient dust, the sky would’ve allowed for the sun’s crepuscular rays to
shine down upon it as if to suggest an arrival. These days, the sea, when I see it

in pictures obtained by way of my more uninspired (albeit wholesome)
Internet browsing, looks particularly bored. Same as any other day, it seems

Growing up in Champaign-Urbana, Curtiss absorbed the diversity and culture that the University brings to that small city. But much of central Illinois is rural and agrarian, with easy access to nature, so Curtiss felt immediately at home in Newark (where his wife had accepted a position at UD) when they moved here in the summer of 2019. With their small son, the family “had only a few months to settle in before the world started to change.” And so did he. As job-seeking became impossible during the pandemic, “it was fairly easy for me to transition to full time childcare and housework.”

A situation that at first seemed destined to sap his energy and attention has evolved into a settled writing routine that “accounts for the needs of my family as well as my own emotional needs.” Since the pandemic began, Curtiss has “become much more thankful for [all] those who make our lives more manageable,” and that gratitude has spilled over into his creative life. “I find myself identifying patterns in my writing practice fueled by cynicism or self-importance and replacing them with new patterns, based in gratitude when possible and honesty when necessary.”

Curtiss is humbled to receive the Division’s Established Artist Fellowship. “I’m so profoundly honored by the DDOA’s recognition of my work I don’t really know what to say!” The award will serve as motivation to publish his first full-length poetry manuscript and seek out an artist residency. “Or perhaps I’ll invest it in espresso coffee pods!” – coffee being fuel for many a writer. But through the Fellowship, Curtiss will continue to learn more about the craft of poetry, a place where “I almost always feel smore connected to myself and to the world around me.”