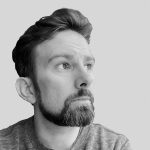 “I ask viewers to meditate on the cyclical nature of the moving images and bring new interpretations to them.”

Animator Tad Sare began his career with traditional figurative painting studies at Indiana University and Philadelphia’s Pennsylvania Academy of the Fine Arts. But he was always curious about art in motion. As a boy, Sare created Phenakistascopes (a 19th century animation device) “out of Cool Whip containers for my 6th grade science fair.”  It was at PAFA – in his MFA program – that he was given the opportunity to experiment with video and animation, and he began to think differently about his drawing. “I loved the idea of generating movement out of these quiet moments I was representing on paper.”

In his work, Sare collects sounds and footage from daily life and intertwines them with fictional sources “already loaded with intrigue, conspiracy, deception, and the unknown.” By combining imagery and “cultural touchpoints such as James Bond and Bigfoot” with his own biography, he foregrounds the individual “lost in the gray world of collective memory.” This wry, insigntful work “collages small moments from espionage and thriller cinema with tropes and devices from animation history,” as the viewer experiences their surreal humor and “cyclical narratives.”

Since 2009, Sare has taught art at Delaware College of Art and Design (DCAD), where he currently serves the Program Chair of Animation. He is also a busy curator of exhibitions at DCAD and at PAFA, where he continues to teach in the Summer Arts Academy. The Wilmington resident – originally from Bloomington, Indiana – lived in Philadelphia after art school, but Sare and his family moved to Delaware in 2017 when his daughter was born.

Sare was – and still is – inspired by genre-bending artists William Kentridge and Fernand Léger and the animation of Ub Iwerks.  Working in a genre that continues to expand exponentially, he is challenged to “find new ways to present my animated work,” whether exploring large-format gallery presentations or figuring how to “incorporate mobile app usage of my moving drawings.” He finds that “animation needs a beginning, middle, and end completed before you see the final composition,” so he must create in parts while constructing the whole. But seeing it completed is worth the effort. “I live for the ‘Ahha!’ moment in my work.”

Because his daily life infuses and informs his animations, Sare “likes a little of everything, and I am never bored.” That includes the joy of spending time with his family, cooking, playing, and watching soccer together. Their interests are also his own: “a good mystery book, listening to music, long walks, and turning anything into a game for amusement.”

The pandemic has given him a little more time for studio work, though “it is difficult to carve out time for yourself and your creativity.” However, Sare notes that he has never had better meals. “Our creativity takes many forms and has many outlets.”

Never idle “when it comes to making things,” Sare hates “doing the same thing twice,” so he plans to use his award to explore something totally new. He may possibly “incorporate physical or sculptural objects in the presentation of an animated film [though] I don’t know what that means yet.” Or a new direction may involve using the animation “’window’ as a way to frame a composition and expand conceptual ideas of ‘seeing.’” The Fellowship has given this busy artist “lots to think about.”