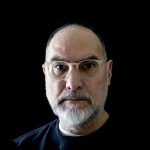 “I’m continuously excited about how a specific medium which is traditionally used in one genre can be expanded to a successful level in another.”

All his life, Joseph Barbaccia has been inspired by color and form. He was drawn to their motivating force even before his artistic inclinations and aspirations were clear to him. There were no artists among his extended family or their friends, but “at church on Sundays, I remember always wanting to sit in a pew the had a stained-glass window at the end in order to enjoy the colors close up,” as he studied the statues and the bas-reliefs on the walls.

Barbaccia was born in Philadelphia, but when he was a toddler, the family moved to rural New Jersey. He began drawing in earnest when he was six, at first to capture the attention of his second-grade teacher, whom he admired. But soon his family began to take notice. “Since then, except for six months in 1979 when I took a motorcycle trip [out west], I never stopped making images.” After taking classes at Philadelphia’s Tyler School of Fine Arts, Barbaccia traveled through the United States and the South Pacific, drawing and painting in a “mostly representational style.” In 1996 he settled in Potomac Falls, Virginia, where over the next two decades his experiments with encaustics, freestanding sculpture, and mixed media gained increasing attention and recognition.

The prolific artist has exhibited widely – over 35 group shows and 10 solo exhibitions – in galleries and major venues throughout the East Coast and the mid-Atlantic, including the Greater Reston Art Center, Delaware Contemporary, Rehoboth Art League, and Washington’s Corcoran Gallery. He’s been the subject of dozens of articles and reviews, both as an artist and as an illustrator with three published children’s picture books (and a fourth underway).

Barbaccia had always had a large studio, but in 2018 he and his wife (also an artist) moved to Georgetown, Delaware, where his workspace was smaller. Realizing “I would have to change my materials and methods to accommodate the new reality,” he landed on polymer clay as “the perfect choice.” The material – with its transparency and a full color spectrum – allows him to create in both two and three dimensions. It led Barbaccia in a new direction. “Approximately 90% of the artists creating with polymer clay create jewelry. I thought the time was right to expand its visual range.”

As well as inspiring Barbaccia, working with polymer clay has challenges. Using atypical art materials, “I sometimes come up against limiting parameters in applications to shows or competitions . . . [including] a list of accepted materials that doesn’t include polymer clay.” And the pandemic has led to a scarcity of his chosen material. But he continues to push against these and other constraints and revels in “showing and sharing my work.”

Barbaccia is grateful that the Division’s Fellowship will bring him into contact with artists statewide, helping alleviate the disadvantage of “working alone in a relatively isolated area.” And he’s eagerly anticipating his solo show, giving him “a sense of completion and a chance to review my latest work with a wider point of view . . . pushing me in a different direction.”

His DDOA-winning submissions – ranging from portraiture to landscapes and beyond – reflect this viewpoint and display this lifelong commitment to exploration, but they have also returned him to the colors and bas-reliefs of those church visits that were his early inspiration. “I like the word ‘inspire.’ It can mean breathing in. And that’s what I do daily.”