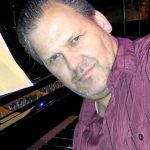 “My prayer is to always use my gifts to shine an ever-bright light over the atmosphere and diffuse darkness.”

It’s no surprise that Jeff Knoettner chose music – or that it chose him. “My father played trumpet, and I grew up listening to big bands and jazz.” In elementary school, Knoettner played trumpet and organ, but in junior high he began to study piano (jazz and classical). Grateful for his musical gift, he aims always to “impart joy, laughter, warmth, and love” in his performances.  “I know I’ve done my job right when I see heads bobbin’, feet moving, and body parts jiggling!”

A graduate of Boston’s esteemed Berklee School of Music with a degree in piano performance, Knoettner has performed widely, including with his own group (jeffjazz trio). He’s played at festivals nationwide, including at Delaware’s own renowned Clifford Brown Jazz Festival, where he’s played with bands that opened for performers like Buddy Guy, B.B. King, BWB, and Grammy- and Emmy- winner Arturo Sandoval. And for over 25, years, he’s been pianist for The Cartoon Christmas Trio, whose holiday tunes pack the house in scores of venues.

The Wilmington resident and his sister were born and raised in Haddon Heights, New Jersey, but “I have to thank [Karen] for marrying me and transporting me to the great state of Delaware.” They moved here 26 years ago, and he often teams up with his wife (a vocalist and pianist) to perform standards and Broadway favorites. Knoettner also loves the natural world – “the woods, the ocean, the beauty of God’s creation” – that he finds so accessible in the Mid-Atlantic.

As a performer and composer, Knoettner is inspired by a host of musicians – from early influences (those big band albums, Maynard Ferguson, Chuck Mangione) to current performers like Pat Metheny, Herbie Hancock, and The Yellowjackets. Practice is an integral part of his discipline, and he always seeks freedom in his playing regardless of technical restrictions. The challenge is “to say what [I want] to fully express one hundred percent without limitations. The heart has so much more to express that the fingers don’t allow.”

A godly man, Knoettner is grateful to “bless and touch others” with his musical gift. And true to the essence of jazz – his chosen field – he loves to collaborate with others, regardless of politics, race, ideology, or musical background, to “connect and bridge thoughts and spirits” through that universal language. “Everyone who is committed to this art form in any way has something different to bring the table.”

Like all performers, Knoettner was greatly impacted by the pandemic. It has affected “my gigs and unfortunately my income.” But on a positive note, he now uses technology more, allowing him to connect with other musicians and friends. And as a dedicated teacher, he’s been teaching piano lessons virtually as well.

In applying for the Fellowship, Knoettner was encouraged by his wife to submit three of his own original compositions, and receiving it has “really encouraged me and motivated me to get out the music I have been working on for many years.” He plans to record a “very long overdue” album of arranged standards and original material. “We have a wonderful rich culture in this state with some incredibly talented musicians that are not recognized enough for their talent,” and he plans to continue working with them to “honor and inspire my fellow man.”