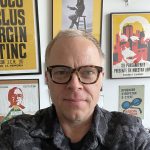 Printmaker, professor, and musician Aaron Terry has “always been a visual artist.” The world around him and its intersection with world events have both had a profound effect on his life, his work, and his extensive travels.

Terry and his three siblings were raised in upstate New York in a house (without electricity or running water) that his parents built. When he was seven, the family moved to Philadelphia, where his “incredible teachers impressed the importance of art and culture.” His earliest visual influences ranged widely from “the codices of pre-Colombian Mexico (Codex Borgia and Codex Nuttall) [to] the artwork of Star Wars.”

Terry earned degrees in both Latin American studies and printmaking, fields that profoundly influenced his early work and continue to fuel his vision today. At 21, he moved to the San Francisco Bay area, where he “was greeted by a rich history of printmaking.” He remained for over 20 years, working in art- and music-related fields and teaching at California College of the Arts and the San Francisco Art Institute (where he received his MFA).

Terry was brought up speaking both English and Spanish, something that enabled him to live and work extensively throughout South and Central America. In 2017, he decided to move back to the Delaware Valley and is now a professor at the University of Delaware, where he runs the Printmaking Department.

As well as being a visual artist, Terry is also a DJ and musician and member of the band Gold Wood (“the audio arm of three visual artists”) who has organized art and music events throughout Latin America. The world of sound continues to influence him, both as a listener and a creator. Studying how creatives cross in and out of genres, the artist is also inspired “by the crackle of vinyl, the tap of a toe, the squeaking of a pedal in an old blues or jazz album,” sounds he employs in his sonic work.

He is also passionate about cooking, and during the pandemic he greatly missed the ability to have “an old-fashioned dinner party.” Terry considers music and food “a landscape of experience . . . means of communication” that don’t require participants to speak another language to enjoy experiences in common.

Terry’s work has been seen in ten solo exhibitions and over 30 group shows, as well as a half-dozen murals and installations. He is a member of Philadelphia’s Vox Populi artist collective, a group that allowed for creative community during the time when his multiple international projects had to be put on hold. But alternatively, the pandemic has allowed Terry to prioritize his time in the studio.

Printmaking is “an enduring process” across all his projects. As a printmaker, Terry challenges himself to manipulate the medium to see if an image can be re-used, “to convert experience and ideas into something new, like cooking old recipes with new ingredients.” Most recently, he has been fusing music and visual art, “working towards a revisitation of what the ‘American Dream’ might be.” This recent work is based on Studs Terkel’s nonfiction work Hard Times and the recordings of Moses Asch’s Folkway Records, and Terry is “extremely excited” by the support provided by the Fellowship” that will enable him to continue this creative exploration.