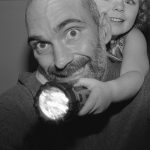 “I read a lot, and [then] I go into the world and make pictures with as few notions as I can.”

Photographer Jason Jellick set out to become a writer, and he earned his MFA in Nonfiction from New York City’s Columbia University. He still keeps a regular daybook and journal, but “one day, relatively speaking, I put down the pen and picked up the camera and haven’t looked back.”

Throughout the past year, the Wilmington artist has been driving all over the two-lane roads of Delmarva – “north and south, east and west, making work mainly in Delaware and Maryland,” with occasional forays to photograph in Virginia. These trips have resulted in Peninsula, his current oeuvre, photographs that document a place but are also “a series about the metaphor of a peninsula – one way in and one way out . . . [providing] a means to express the gamut of human experience and emotion.”

The youngest of four children, Jellick grew up in central Pennsylvania in the small Susquehanna Valley town of Friendsville. He’s married with five children and has been a Delawarean for six years (“on and off”), arriving in the First State after living and working in nationwide in California, Maryland, New York City, and Maine. He has also studied and toiled in Switzerland (Zermatt) and France (Cannes), and professionally he’s trained and worked as both a chef and a teacher of creative writing and English.

This makes him able to draw on a rich range of geographic and life experience, and Jellick always tries to “see in a way [that] others do not see and to drag that back from the world.” It’s not surprising, given his writerly education, that much of his visual inspiration comes from literature, poetry, and music. Those sources are undoubtedly the reason for the rich emotional texture in his black-and-white photographs; he creates visual images that pulse with an unidentified, often mysterious narrative. “I’m unsure by what alchemy reading something or listening to something is transformed into making images, [but] I really try not to think when I am photographing.”

Jellick shoots on film using his 35 mm cameras, the traditional tools of classic black-and-white photography, and he finds inspiration in the work of other photographic artists including Eugène Atget, Walker Evans, Garry Winograd, and Thomas Roma. It’s challenging work, but “it should be, after all. To produce anything aesthetically high should be a huge challenge.”

Jellick is “very pleased to be recognized for what I do and for DDOA’s support,” and he has plans to use the Division’s Fellowship award to purchase more film and possibly another camera or additional darkroom equipment. It’s his intention to keep making those “long meandering drives along the Delmarva peninsula . . . and continue making photographs in this manner for the foreseeable future.”