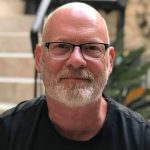 “The pleasure of creating is with me decades later. Constructing the poem engages my imagination and my senses. There’s sorcery in making something out of nothing.”

Jack Mackey has experimented with a number of artistic media – including painting and guitar – seeking a satisfying creative outlet. “And when I discovered the enjoyment of writing poetry, I knew I had found it.”

The second of seven children raised on Long Island, New York, Mackey attended college in Dayton, Ohio and majored in philosophy and English literature. Earning his MA in English Language and Literature from the University of Maryland (his thesis was a book of poems), he settled in the Washington DC area for a two-pronged career, seven years as an English teacher and then working in information technology. “I left teaching for the business world and left poetry writing behind – for 35 years,” returning to writing fueled in part by the grief of losing his son.

Five years ago, Mackey bought a home in Rehoboth Beach, discovering that “the pleasure of creating is with me decades later.” He joined the Coastal Writers group, finding personal and professional encouragement in their meetings and critiques. As a reader, he’s especially drawn to the realism of the New York School and contemporary poets like Billy Collins, Ted Kooser, and Jericho Brown, as well as “the poet I am reading at any given moment.” But Mackey is also inspired by his accomplished Delaware colleagues and his husband, siblings, children, and grandchildren, who “provide me with a constant stream of ideas.”

I busy myself making
sourdough starter,
involving ingredients I don’t have
to shop for – flour and water, and hope
a few sympathetic microbes will fly
into my kitchen alive and ready to work,
leaven this flat feeling that our lockdown
could last what’s left of my life. I’m doing whatever
keeps me from sleeping
all day, drinking too much.
On YouTube the helpful man uses just
a measuring cup, eschews
a digital scale and all its romantic precision.
Just eyeball it, leave something to chance he says.
This recipe for anarchy, his casual approach
suits me fine. I think of all the things
you can do just enough –

Since moving to the First State, Mackey’s elegiac, insightful work is beginning to be widely published. “Life experience is invaluable to writing, and I’ve lived long enough . . . to have shed the burden of self-consciousness.” He believes that writing requires “perception [and] the skill of distillation, weaving language in magical ways . . . to explore meaning and shape a sculpted piece.” His poems are a way to “exorcise demons, rationalize the past, work through grief, rip the crusty cover off my feelings, and repair the world.”

Mackey is especially rewarded when he reads his earlier work and finds it still satisfying, and he loves the feeling of finishing “a good poem.” Greatly encouraged by the Division’s accolade, he notes that “everyone loves validation,” and this Award is a validation of his efforts over the past five years. “It means I am doing something right. Keep at it.” The Fellowship will help offset the cost of attending the Fine Arts Work Center in Provincetown, Massachusetts (an artist retreat where he’s worked before), and he’s also excited about being part of upcoming Division events.

For Mackey, the solitude created by the pandemic (and his love of swimming and cycling) gives him time for reflection and helps to gestate ideas. “Being cloistered has allowed more time to write,” but it’s also kept him away from interactions with people. “To create art that I want others to see . . . the community experience is essential,” and he’s looking forward to gathering again with colleagues at in-person meetings of the Coastal Writers, “for help with my poetry, but also for their friendship and encouragement.”