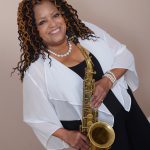 “I started playing classical clarinet, but that passion quickly translated to jazz and improvisation. My philosophy is to be who I am and have the artistic ability to evolve and change.”

Jazz performer Fostina Dixon lives – and lives up to – her philosophy in myriad ways. Evolution and change have been both her bedrock and the hallmarks of an accomplished, wide-ranging career. Dixon even named her jazz ensemble “Winds of Change,” and they have been blowing audiences away – Dixon’s artistry creating those winds – for over 30 years.

Growing up in New Castle, she studied with “the late, great Robert ‘Boysie’ Lowery.” As a student, Dixon toured Europe with the American Young Symphonic Orchestra, and then went to college for a double major in pre-med and music at Boston University. She began studying classical clarinet but changed her musical love and moved to Boston’s Berklee College of Music, renowned for its jazz program. She then went to Los Angeles to work with “the late great Marvin Gaye” and received her BFA from California Institute of the Arts.

That move to the west coast – and then one east to New York City – cemented the arc of her career. She became a world-class virtuoso on soprano, alto, and baritone saxophones, flute, and clarinet, as well as a vocalist and highly regarded composer. As a professional musician in the Big Apple, she has fronted or played with hundreds of musical greats (Abbey Lincoln, Cab Calloway, Melba Liston, Frank Foster – the list goes on and on) in scores of legendary venues, jazz festivals, and clubs worldwide, and has made multiple television and theatrical appearances.

Dixon’s recordings garner unanimous praise. “Excellence is my core motivation,” she says, “and I am rewarded by lifting the hearts and lives of people.” Her listeners agree. “Her music sticks to the soul,” says one critic, and another writer notes that her music projects “the power of soul, the power of being whole.” Dixon’s music always exhibits the essential power of jazz, but it’s coupled frequently with a soaring lyricism and often a sense of humor, heard in one of her Award submissions, “Neckbrace.”

Regularly seen here at Wilmington’s Clifford Brown Jazz Festival, Dixon has been honored with multiple awards as an educator and community leader – including a 2012 Division Award for jazz composition. While working in New York, she studied for a master’s degree at Jersey City State College. In 2004 – “to pass on the great legacy of jazz” – she founded the nonprofit Wilmington Youth Jazz Band, an outgrowth of her years as a public-school teacher in New York and Delaware. Dixon is inspired “by God and other people who treat life with love, passion, and respect,” but she is still challenged “by the obstacles that women experience systematically in this society.”

The COVID pandemic has affected tours and public performances, but Dixon is using this time to develop technology skills and put more presentations on virtual platforms. The Fellowship Award will help start a new project, “a musical revue that would feature five dynamic, original women of different music genres.” She is thankful to the Division “for the support they have given artists for years. It means a lot to us artists to have an artistic platform such as this.”