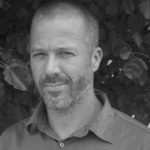 At first glance, many of the photographs in Chad States’ series “Cruising” seem benign. They feature basic landscapes of wooded areas, sunlight slashing through the shadows here and there, portions of the frame overcome by shrubbery.

And then, as if out of nowhere, a man – or part of one, or of more than one – becomes visible through the noise.

States’ photographs of cruising – gay men meeting for sex anonymously in discrete but public areas – are meant to illuminate the split between actions that are invisible to the general public but readily noticeable to those who participate. The subjects are anonymous, often appearing only partially, obscured by vegetation or shadows.

That unknown is what’s most alluring to States.

“You don’t know who’s going to be there,” States says. “It’s all about the idea of possibilities within the unknown. But even as a viewer, you actually have to search some out. They kind of appear as landscapes, and within the landscape there might be something small happening.”

States, 35, lives and works in Rehoboth Beach. He’s editing a book of his photographs called “Cruising,” which powerHouse Books will publish in the fall. The Division’s grant will go toward making exhibition prints, buying frames, gathering supplies and embarking on his next, as-yet-undecided, project.

When States set out to document cruising, he began on the sly.

“I had a really difficult time with it,” he says. “Something I came to realize at some point is that actually, the more public I am with my camera, the more they accept me in the space. At first, I was kind of hiding. But I think people were like, What’s that dude hiding over there for? And then so I started walking around very blatantly with my camera, and some people would take off and disperse, and some people wouldn’t.”

States several years ago exhibited a collection of his photographs called “Masculinities,” individual portraits in which some are nude, some impeccably dressed; some are standing or laying vulnerably before the camera, some exude strength.

“Cruising,” on the other hand, forces the viewer to search each landscape for a signs of its subjects. The viewer, as States says, becomes a hunter.

“I am interested in creating a sense of fantasy in which the viewer can be seduced by the romanticism of the landscape yet feel a tension from the possibility of this unknown,” he says, “a place where one can become lost both physically and psychologically.”