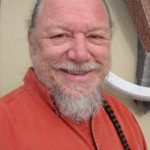 To behold the public creations of Rick Rothrock is particularly different than the more typical experiences of art lovers – a painting, for example, can be disconnected from viewers by a velvet rope, and every bit of its environment is carefully controlled; Rothrock’s sculptures often invite people to walk within their limits, to inhabit them, as he says.

Born into a family of manufacturing silversmiths, Rothrock was a founder in 1979 of the Delaware Center for the Contemporary Arts. His stone sculptures dot the state – in Wilmington, there is “Rendezvous” at Freedom Plaza, “Reflection” at Can-Do Playground and “Twin Obelisks for Brownie” in the Clifford Brown Greenway Park; in Dover, there is “Quill and Cube” at Constitution Park.

“Thirty years ago,” he says, “looking at the public environment in Wilmington and seeing how many great spaces there were, I thought, Boy, there’s so much that can be done.”

The reach of the 60-year-old Arden resident goes beyond the public works – Rothrock has created exhibits and fountains for institutions including, in Philadelphia, the Academy of Natural Sciences and The Franklin Institute, and in Minnesota, the Museum of Science and Technology. Private residents and corporations also have been among his clients.

His work, of course, has taken him to cities around the world – and some pieces have remained in those locations. Rothrock calls Delaware his home, but he attributes his evolving perspective of time to those journeys.

“It’s kind of surprising to me how my view of the world has developed over time,” he says, “and being able to get some distance away from Delaware and the community has given me perspective and helped me to feel that I inhabit a larger place. But I visualize this – this is certainly the center of my life.”

Rothrock favors the exploration of relationships among materials and forms, light and colors, textures and movement. Geometric shapes carved onto or into stone put into relief the natural surfaces and structures of stone.

As the Division’s 2011 Masters fellow, Rothrock will use the grant to more freely choose his focal works. Public sculptures deliver pride and permanence, but such projects are logistically and creatively complicated. In his studio, Rothrock can work more independently.

More than 20 years of steady practice in stone sculptures, he says, has led him to “more fully appreciate our planet as a beneficial living organism. It has taught me patience and given me the knowledge that the universe is fundamentally balanced and peaceful. …

“My sculpture, fabricated from a variety of stones collected from a wide geographical area, affirms my deep respect and appreciation for art and the natural universe that surrounds us.”