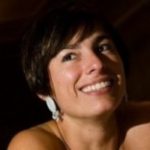 As a girl, she was surrounded by her mother’s piles of art supplies, by her father’s carpentry tools, by the cogs of her machinist grandfather.

She lived in Lewes, the storied town beside Breakwater Harbor. The seaside habitat suited her. In time, it would have a profound influence on her work.

Heidi Lowe, now 33, displays a fusion of the skills of her closest relatives – she melts and bends metals into wearable creations that hint at the histories of the objects that inspired them, but she injects a sense of nature into each design.

She’ll notice an intriguing metal object – a gold coin, silver flatware, an antique urn – and, after researching its history and creator, she’ll make a rubbing or take an impression. Ultimately, she wants to reform utilitarian pieces into contemporary, wearable art. The jewelry might take the form, for example, of a ring or a locket.

“This metamorphosis hints at the evidence of a past life,” Lowe says. “It was a coin, but now it is a brooch that talks about the coin.”

Her passion for the life and afterlife of each object is balanced with a reverence toward nature – Lowe favors incorporating clouds and seaside imagery such as jellyfish, shells, water and birds. They seem at home in her small, metallic habitats.

She made her first ring while a student at Cape Henlopen High School. She earned a bachelor’s degree in metals and jewelry at the Maine College of Art, then a master’s with a concentration in metals and jewelry at the State University of New York-New Paltz. After college, she moved to New York and became an assistant director at Leo Koenig Inc., a contemporary art gallery.

Her interest in her craft goes beyond the creation of jewelry – Lowe has lectured at the national metalsmithing convention, the Rhode Island School of Design and for other organizations and events. She has traveled the world, influenced by small studios in Germany, New Zealand and Holland. And in 2004, she returned to Southern Delaware.

There, in a beach cottage on Rehoboth Avenue, she runs the Heidi Lowe Gallery. She features contemporary jewelry representative of her global tastes and is host to six shows per year.

She teaches metalsmithing at Towson University and teaches art to the mentally or physically disabled at VSA Arts of Delaware.

As the winner of a 2011 Individual Artist Fellowship from the Division (Established artist; Visual arts: Crafts), Lowe earned a grant that will allow her to shift focus from her business to her own work. She intends to buy a plane ticket (she didn’t cite a destination) and get a hotel room, to remove herself from daily life and focus on research, sketches and honing her ideas. The grant also will help her acquire much-needed tools and supplies.

“Jewelry,” Lowe says, “is not fully alive until it is worn. The human body, acting as a vehicle for the work, becomes an integral part of the piece.”