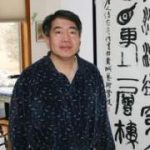 Maybe if Russell Susumu Endo had heeded the urgings of a Russian uncle, his journey into the oft-overlooked world of poetry would have been more direct.

Endo was in high school at the time, but he began experimenting with poetry the summer he studied for the bar exam. For 15 years thereafter, he worked for the City of Philadelphia Law Department in Health and Human Services. He faced cases involving child abuse, mental health, homelessness, elderly neglect and abuse, tuberculosis control and more, culminating in his acceptance from the Mayor’s Office of a Liberty Bell Award.

First, the mind must meander, begin
to identify the meanest thing

sheen iridescent wings so
that soon, numbers may

accumulate with each revelation,

and not a shadow will have been lost,
skulls and bones settled in the dust,

memento, so may we entrust

the horizon with out sight, search
where beasts may have sauntered,

When his wife got a job in Smyrna, the family moved. Endo, 55, is their children’s primary caregiver, a role that includes daily treks to and from their school in Wilmington. He’s an active volunteer, including on the boards of Wilmington Friends School and Greene Street Friends School in Philadelphia. He’s quite involved with their children’s schooling, but Endo would like to begin “a new spree” of poems as the school year settles down. (He does not, however, write poetry with a specific project or theme in mind.). Meanwhile, a manuscript of his is being considered at several competitions.

His Japanese middle name, Susumu, means “progress.” His parents gave it to him out of their aspirations for him to lead a life more comfortable than theirs – they had been held during World War II at relocation camps. On the boards on which he serves, he is Russ Endo. In legal briefs he has filed, he was Russell S. Endo.

In poetry, he is Russell Susumu Endo.

He sees his craft as “kind of akin to landscape painting, as an approach to writing. … There’s some inner truth to what is there that I’m trying to express. Often the way to express is it through the spaces around it, to let the language and the image ripple out.”

The river is flowing without end.
It inches along in arcs and bends.
There may be gurgling in the strata,
there is pulsing along the surface.

It inches along in arcs and bends;
it grinds and wears down rocks to tears;
there is pulsing along its surface
as each moment and its goals merge.

It grinds and wears down rocks to tears.
The river begins to know its banks
as each moment, and its goals, merge,
as particulars flow so much better….

The river begins to know its banks –
it speeds and presses in lesser curves
as particulars flow so much better;
the length of history becomes clearer.

It speed and presses in lesser curves;
it slows down against harder rock;
the length of history becomes clearer.
It may take patience to learn its path.

It slows down against harder rock,
pondering all obstacles head-on.
It may take patience to learn its path,
looking beyond one’s own future,

pondering all obstacles head-on:
there may be gurgling in the strats,
looking beyond one’s own future:
the river is flowing without end.

He often writes about or is inspired by nature, directly or indirectly. “The Great Wave off Kanagawa,” a woodblock print by the Japanese artist Hokusai, depicts three long, narrow boats of fishermen facing a turbulent sea – one threatening, white-capped wave dominates nearly all of the print’s left side and dwarfs Mount Fuji, which peaks above the liquid horizon in the distance. The work drove Endo to write a poem that used tumultuous language to illustrate the power of the waves.

The fellowship, he says, “is a very nice acclamation in an existential field that often feels like whispering some deeply held insight into the Grand Canyon.”

He plans to read his poetry at the Dover Public Library in mid-June. With his grant, Endo will build a website, buy a laptop, invest in professional development and subsidize contest entry fees and poetry journal subscriptions.