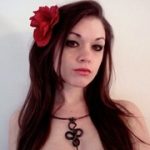 If you were to wear a dress of Ellen Durkan’s creation, you’d be wise to do some weight training beforehand. The dress would appear flowing, but steel and wood and leather and copper and brass? They don’t lend themselves to the concept of “flowing.”

Not unless Durkan had a hand in their design.
The fashion world is filled with women. Blacksmithing, not so much.

Durkan got into the hot and heavy craft one summer during an assistantship. She didn’t know what she was doing. But her colleagues liked her work and saw potential, so they hired her.

She bought a forge and an anvil, tools of the blacksmithing trade. And so Durkan was on her way to the peculiar specialty that now designates her as somewhere between a sculptor, a blacksmith and a fashion designer.

“You can take an old craft and bring new life to it,” she says. “Just because people have been doing something for hundreds and hundreds of years doesn’t mean you can’t bring something new.”

With details befitting the blueprints of otherworldly mechanisms – the “cyborg lady” drawings often exist as works unto themselves – Durkan sketches her conceptual designs on life-sized paper. She sometimes builds the dresses’ frames around her body, creating “a fine steel structure that emphasizes balance and symmetry.”

She likes the stark contrast of the soft, nude female body with the hard, metallic twists of the dresses. From curling wisps of steel to larger patches of solid metal, they leave in the viewer a sense of vision that penetrates clothing.

Durkan at the moment is bartending, working on commission and teaching sculpture and drawing at the Delaware College of Art and Design, in Wilmington.

She’d like to plan a fashion show and set her work into motion. And she isn’t overly concerned about the more cerebral appraisals of art.

“I think people get it on different levels,” Durkan says. “I don’t feel like what I do is the kind of art where it’s like, ‘Oh my God, it’s so artsy, it’s so conceptual. I’m not smart enough to understand it.’ I feel like a lot of people that don’t know anything about art, that don’t have an ‘in’ to the art window, they see it on a, ‘Hey, that’s cool,’ level.”

And that, it happens, is exactly how many people react upon first seeing her creations.