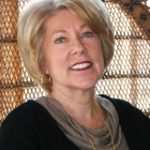 Gail Comorat began writing poetry about four years ago. She was 58 and had been most comfortable writing fiction. Encouraged by several colleagues, she tried her hand at poetry.

She swore at the outset that it was not her genre, but early and solid tutelage by other poets and teachers – she’s taken intensive weekend workshops with Gerry LaFemina and has worked with Sue Ellen Thompson and Devon Miller-Duggan – convinced her that poetry was the better device for storytelling.

Comorat, a retired teacher, lives in Lewes and spends entire days writing and revising. She devours poetry and often dips into others’ lines for prompts.

“I try to write something daily, even if it’s only a few lines,” she says. “Carlos Fuentes said, ‘Writing is a struggle against silence.’ I’ve tried to listen to that silence this year, let it guide me into memory.”

Lament
(excerpt from: Finding the Happily Ever After)
May 2010

My mother called me a fence-climber,
said I was born seeking more. I was
six the first time I ran away,

would have stayed gone
if it weren’t for the dark.
Yes, it’s true. I wanted

something else. Not the maple
and slip-covered furniture,
the linoleum kitchen odored with fish

and Pinesol. It wasn’t that I was Peter,
refusing to grow up. My affliction
was more like Alice’s curiosity

or Goldie’s wanderlust.
Lately, I’ve been homesick,
missing the open-window

that would spread itself before me
with richness, not paper-thin
and impermanent

as Mother’s Marcal napkins. At seven,
my favorite word was leave-taking.
Just yesterday, I read the word nostalgia

comes from nostos—homecoming
and altos—pain. A wound
that never closes.

Her own themes have shifted from grief to joy – during the past four years, Comorat wrote and edited poems mostly inspired by the losses of her first husband (25 years ago), her brother (a suicide in 1999), her parents and a granddaughter. In “Little Black Purse” (2007), the sight of her mother’s old pocketbook elicits a swirl of memories and emotions.

Writing about grief, she found, was therapeutic.

But her narratives, in time, shifted toward her having rediscovered happiness. She feels a strong sense of community among writers in Sussex County. Comorat is a founding member of the Rehoboth Beach Writers’ Guild and an active member of a group that weekly meets at the Rehoboth Art League.

She and her husband enjoy hopping about the globe, and their trips to Africa, Europe and Mexico have made their way into Comorat’s poetry. But she recently has been pulled toward fairy-tale characters and the Biblical Eve. (Comorat imagines how Eve might’ve responded to the fall of Eden, how she ultimately rediscovered happiness.) Her autobiographical perspective, she says, has opened to include other characters.

The Division’s grant will allow her to complete her current collection of poems and, she hopes, to work with Patricia Fargnoli, a poet she admires.

Rivers
(excerpt from: Finding the Happily Ever After)
March 2010

In Zion, your hand finds mine
as we watch a deluge rip away Utah’s valley walls.
After a record year for snow and rain,
the Virgin River bulges in a red-brown rush.

Ten years before, we were honeymooners
driving beneath doom palms and acacias, past
the sluggish waters of the Ewaso Ng’iro,
same brown as the scrub and overgrazed grasslands

of the Maasai. Only color in the kraal that day,
the women in red plaid kangas.
At the village, children were seated in order of size
before a dung-sealed enkaji where flies buzzed

about mouths and eyes, settled on shaved heads.
We couldn’t tell the girls from boys.
Eleven pairs of hands fluttered like sparrow wings
as they performed their song, then pointed, calling:

Keirowa, keirowa—the Maa word for hot.
Beside me, a woman unfurled her hair
in a torrent of rust-red, then knelt in the dirt.
Mouths agape, the boys and girls circled her,

raised their palms as if expecting to feel a fire.
In Zion, as we watch sandstone overflow and bleed
toward Colorado, we remember the children.
The river is the color of the red ochre balm

Maasai boys rub on themselves in manhood ceremonies.
And the girls—no one told us that day of their rites,
of that season when women descend upon them
like dark birds bearing knives for talons.