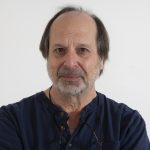 “I love great tools. Tools that are well-designed and do what they are supposed to do.”

From his lifetime working as a sculptor, architectural model-maker, and fabricator, Harold Kalmus knows good tools and how critical they are to the successful completion of any task. So, after an unexpected career change in 2009, the long-time Arden resident was looking for both a new artistic challenge and a creative way to increase his income. At the same time, he found himself taking over the family’s cooking. “The first thing I looked to – and was disappointed with – were our knives . . . dull, abused and dangerous.”

To remedy this situation, Kalmus decided to make his own. He had no specific influences, and he studied existing blades – some good, some not, some well-designed, some “suffering from a lack of design or an excess of design.” Grounded in his sculpture degree from the Philadelphia College of Art, he had an understanding of metal-working processes. With that – and the knowledge gained from an illustration and fabrication career and his experience as an arts educator – Kalmus began to teach himself this ancient craft.

Knives are practical items, “made to be used, used hard, and used every day.” The craft carries an enormous amount of tradition, along with a necessary balance between utility and design. “Cooking knives have evolved to the shapes that best suit the intended task,” and Kalmus found that a diversion from those established shapes meant that the tool’s functionality would suffer. So, he creates compelling designs within these existing frameworks, following “time-tested blade shapes and turning my focus primarily on the handle . . . a 5-5 ½ inch canvas on which to create a unique, attractive design.”

Kalmus still works actively as a sculptor, dividing his studio time between the two artistic worlds. He has taught sculpture at Delaware College of Art and Design and has a January 2022 exhibition scheduled in Philadelphia. His knives were featured in the 2019 Philadelphia Museum of Art Craft Show, one of the country’s most prestigious juried shows, and in early 2020 he was gratified to be accepted into several other major shows. But the pandemic cancelled them all, and so marketing his work continues to be challenging.

Work in the studio continues, however, and on his website his culinary creations are showcased in photographs that are – not surprisingly – also artworks. One of his great pleasures is that each knife he creates “hopefully gives the owner a bit of pleasure every time it’s used, turning a routine task into something more enjoyable.”

It’s “an honor and an affirmation” to receive a Division Fellowship, and Kalmus plans to use his grant funds to acquire improved dust-collection equipment. “Making knives – grinding steel – is very messy and very unhealthy work.” He also hopes to upgrade one of his machines and (soon) apply some of his award to travel and craft show fees.

In the meantime, Kalmus continues to create sculpture – and he continues to cook, using his own finely crafted tools. “Give me a large pile of scallions to slice at a jaunty angle and I’m a happy guy.”