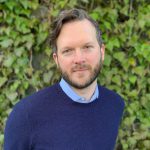 “In college I did a lot of historical research, and I found I was more interested in imagining the personal stories of the people I came across. That’s how a lot of my work still starts – photographs, old news articles – glimpses of real life that I can then run with.”

Using actual events as both a starting point and a pivot, Taylor Reid Adams loves to delve into other places and times by writing historical fiction. “When it comes to history,” he avows, “I think most people have a very certain (yet incomplete) idea of what happened.” By creating characters that live in other times and places, Adams can “challenge that certainty and force a reader to reimagine what they’ve taken for granted or never really considered.”

As a young man, Adams assumed that “being a writer meant going off to exciting places to find stories.” He was born in Little Rock, Arkansas and grew up in the Ozark Mountains, so it’s no surprise that he was captivated by the “depth and richness” of the vivid Southern literary tradition. Influenced by great writers like Tennessee Williams, Walker Percy, Barry Hannah, and Flannery O’Connor, Adams began to see that he could write from his own experience. “They taught me that I can find stories by looking at where I came from.”

Some people assume that when you drown your life is over. That’s what Jerry thought, too, until the first time he heard that wasn’t always the case. Jerry’s pap and Roger Helpins sat in rocking chairs on the porch, chewing cud, when their tone became serious, a whisper. Jerry sat on the floorboards next to his pap’s boots, feeding Old Dog a can of beans, pretending not to listen.

Adams has been a Delawarean for three years, but he has lived or worked in widely disparate places – Washington DC, China and England – and taught at the United States Naval Academy. All these locales fuel his writing, currently inspired as well by great magical realists like Toni Morrison and Colson Whitehead. They “help me to see just how strange things can get.”

Currently, he’s working on a book about a series of vice raids in 1950s and 60s New Orleans. The work, “based in historical reality but taking speculative liberties,” swings between the city’s marginalized groups and the wealthy business owners and political elite who ran the French Quarter’s illegal activities.

The Division’s Artist Fellowship will give Adams time to finish this novel and travel to New Orleans for on-site research, where he can explore his other creative love, food and cooking, a passion where “unlike writing there’s an immediate reward!”

For this writer, the biggest challenge is creating characters whose experiences are radically different from his own, holding back his personal sensibilities to imagine “how they see the world.” But the challenge is also his reward. “Empathizing with people – real or fictive – helps me learn a lot about myself and how I view reality.