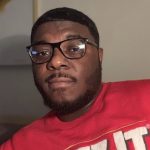 Sculptor Guy Miller was originally from Philadelphia, but the family of four moved to New Castle, Delaware when he was 13 years old, and he still lives and works there. Miller’s sculptures speak allegorically about racial disparity, oppression, and the underrepresentation of Blacks in the culture at large, and he transmits this message by working with and transmuting ready made objects that are instantly recognizable.

Because these familiar things have an immediate initial reference, Miller allows the viewer a subtle but powerful way of entering into the larger issues he’s exploring. To “fabricate the success of an under-appreciated Black superhero film” – 1993’s Meteor Man – Miller created the paraphernalia that would surround a successful film: a lunch box, Pez dispenser, and movie posters. “Black Milk Installation 1” uses antique toy appliances and kitchen furniture to create a diorama that speaks via its cultural allusions, slogans, traditions, and familiar foods.

Miller’s cousin Ronald taught him to draw, and his mother (and Michael Jackson) were early influences on the young artist. He’s grateful to the mentors and teachers who encouraged his Studio Art studies at Delaware State University (BA) and at American University in Washington DC, where he received his MFA and is now a teaching assistant.

Miller came to his particular sculptural discipline because of a need to create works in a timely manner. “I realized I actually had something to say, and maybe drawing for 30 hours wasn’t the best way to say it.” So he began to source ready-made objects and alter them to carry his messages. He finds it a challenge to locate the “perfect object to manipulate” that can dovetail with the time in which he’s working with the appropriate size and condition.

The artist finds his greatest reward in dealing with Black culture to create an experience where “Blacks have the knowledge to access my work, which isn’t the norm in a place such as an art gallery.” He also loves to prepare food, so it’s not surprising that two of the works submitted for the Fellowship dealt with cooking and the kitchen.

This is Miller’s second award from the Division, and “the DDOA has been a major part of my profession thus far.” As well as the welcome grant funding, the artist says that the honor awards him “a great sense of pride and confirmation,” and he plans to use it to expand on work that he’s creating right now.