Each month we feature a handful of arts and community-based organizations and their programs and projects funded by the Delaware Division of the Arts in our Arts Spotlight which will be included on our monthly e-newsletter, Arts E-News and online. If you haven’t signed up yet for Arts E-News, please do so here.

Funding for Division of the Arts grants is provided by the Delaware General Assembly and the National Endowment for the Arts. To view past grants awarded (1999 to present), please visit our Grants Awarded page. 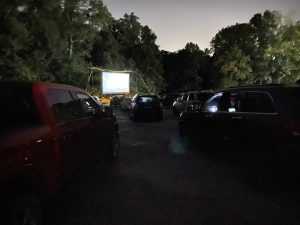 After eight sold out movies last fall, The Grand is thrilled to announce the return of its Drive-In Cinema at Bellevue State Park. The series began on May 1 with four more movie musicals to come:

After the overwhelming success of last fall’s drive-in series, The Grand is thrilled to continue these safe outdoor options for patrons. The Grand hopes this series of movie musicals in a drive-in setting continues to appeal to the public, especially families, and would also connect to The Playhouse’s Broadway tradition. The Playhouse on Rodney Square, housed inside the historic DuPont building, is home the country’s longest continuously operating Broadway touring stop (operating since 1913). With over 2,000 Broadway in Wilmington subscribers, the series hosts more than 7 musicals per year for the Broadway novice up to the Broadway buff. “By tipping our hat to the strong desire for Broadway entertainment in the City, we hope to continue our tradition of presenting the finest in Broadway musicals – now on the big screen,” says The Grand’s Executive Director Mark Fields. Tickets are on sale now and are $15 per person (up to four people per car), plus fees. Children under 12 are FREE. They are available online only at www.TheGrandWilmington.org. The Grand’s in-person and phone box offices are currently closed. 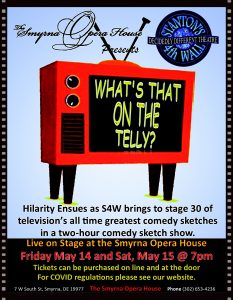 Smyrna Opera House
What’s That On The Telly?
Smyrna
GOS

The Smyrna Opera House was originally built in 1870 and served as the town hall and the center of community activities until its conversion into a movie theatre in the 1920s. Notable speakers included Frederick Douglass and William Jennings Bryant. Since the Roaring Twenties, the Opera House embarked on a long, slow slide into obscurity, until Christmas night 1948 when a devastating fire destroyed the top floor and landmark bell tower. Afterwards, the building sat largely unused, until the Smyrna-Clayton Heritage Association initiated a restoration campaign in 1998. Founded by a small group of Smyrna residents, the Association envisioned a thriving arts center that would immerse the community in a variety of cultural activities. Five years later, the fully-restored Opera House opened its doors to the community of Smyrna and beyond. Since 1998, the Association has offered cultural programming in various locales throughout the local community until the Smyrna Opera House formally opened in March of 2003. Over the past ten years, public demand has enabled the Association to increase its event offerings from five during the premier season to currently around thirty arts endeavors per year. The Opera House rarely experiences a dark day or evening between music performances (including jazz, classical, bluegrass, country and singer/songwriters), theatre shows, rentals, rehearsals, art shows, seminars, weddings, business meetings, summer camp, classes, Association gatherings and various other cultural events. All of the Opera House programming adheres to a mission that provides affordable cultural access and enrichment for people of all ages and backgrounds. 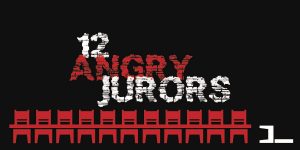 The Everett Theater is proud to resume main stage programming with its upcoming production of Twelve Angry Jurors, a play  that contemplates the huge responsibility of 12 ordinary people as they consider the guilt or innocence of a young man accused of murder. The 12 jurors bring their own histories, prejudices, and biases to the jury room as they work through this life or death decision. In the year of George Floyd and countless others, this play works through the issues at hand in a very human way. Shows are Friday, Saturday, and Sunday; May 14, 15, 16 and May 21, 22, 23rd. Tickets are $18.

Serving the greater Middletown area, The Everett provides classic movies, live theater, curated art exhibitions, summer camps, art classes and more. It offers many opportunities to folks who want to simply enjoy the arts as well as opportunities for people to become involved in acting, set building, or volunteering on a regular or semi-regular basis. As the only arts center in Southern New Castle county, the theater provides a venue for folks who want to enjoy its offerings. More importantly, The Everett provides opportunities that would otherwise not be available. People come there to act in shows, help on the production side of shows, to teach, or simply to volunteer some time to get some nebulous mix of giving back and participation in helping to keep alive an old jewel of a building in Middletown’s Historic district. Annually, it typically has 6 main stage theatrical productions, two dozen movies (including the annual Manhattan Short Film Festival), 10 distinct art exhibitions, 6 summer theater camps, 4 summer art camps, and a few live comedic acts. 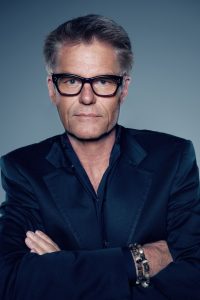 Come join Delaware Theatre Company for its 2020/21 Season—Take 2!, a new outdoor performance series that will showcase a variety of Hollywood, Broadway and regional performers. We know Harry Hamlin as a storied American actor; we don’t know he started a fusion energy company that is on the verge of producing unlimited, safe, clean electricity. The show runs Tues. May 18–Fri. May 21, 6:30 p.m. & Sat. May 22, 2:30 p.m. Performances will be held in the parking lot of Delaware Theatre Company, just feet from the Riverfront. To ensure the safety and comfort of its patrons, DTC has designated 58 “boxes” in its outdoor seating space to accommodate either two or four people. Seating in the boxes is general admission—first-come, first-served. Audience members are encouraged to bring a chair and refreshments. Many different purchasing options are on sale now!

Hamlin, former People Magazine’s Sexiest Man Alive and husband of Real Housewife Lisa Rinna, shares mind-blowing tales of his Hollywood adventures in the World Premier of his on-man show. We know Harry Hamlin as a storied American Actor; we don’t know he started a fusion energy company that is on the verge of producing unlimited, safe, clean electricity. Written in collaboration with Joshua Ravetch, co-creator of Carrie Fisher’s Wishful Drinking. Having garnered a Golden Globe nomination for “Best Motion Picture Acting Debut” in the musical comedy Movie, it is no wonder that Harry Hamlin has been steadily working in television, film, and stage for three decades. He appeared on AMC’s Mad Men, for which he earned an Emmy nomination, recurred on Showtime’s Shameless as well as USA Network’s medical drama Rush, and made guest appearances on the likes of Mom, Glee and Curb Your Enthusiasm. When not acting, Harry’s doing his part to save the environment and is at the forefront of fusion energy as founder of TAE Technologies. Harry followed wife Lisa Rinna’s lead as a participant on ABC’s Dancing with the Stars, for which they also completed a nationwide tour. They next united in the Broadway revival of Chicago as Billy Flynn and Roxie Hart, and starred in their very own TV Land reality series Harry Loves Lisa that coincided with the launch of his Scribner memoir, Full Frontal Nudity. Harry received an additional three consecutive Golden Globe nominations for his memorable role on Steven Bochco’s L.A. Law. On the big screen, Harry appeared as Perseus in the cult favorite Clash of the Titans with Sir Lawrence Olivier, in the groundbreaking Making Love, about a gay relationship in the early ’80s, and The Fourth Noble Truth, which took home honors at the Sonoma International Film Festival. Most recently he portrayed newsman Tom Brokaw in National Geographic’s The Hot Zone: Anthrax. Harry received a bachelor of arts degree in drama from Yale University, followed by a master of fine arts in acting from The American Conservatory Theatre in San Francisco. He also received accolades for his star turn in the Los Angeles production of One November Yankee, which he later reprised for DTC audiences. 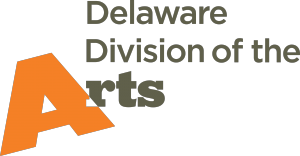 The projects above are supported, in part, by a grant from the Delaware Division of the Arts, a state agency, in partnership with the National Endowment for the Arts. The Division promotes these and other Delaware arts events on DelawareScene.com.

The Division offers a variety of grant programs for individual artists; nonprofit, tax-exempt organizations chartered and based in Delaware; and schools and government entities that support arts activities. View a full list of Division grants on the Grants Overview page.