Every two years, the Delaware Division of the Arts organizes and hosts a mini Writers’ Retreat.

The Delaware Division of the Arts is planning to host the 2020 Writers Retreat from November 12-15, 2020, at the University of Delaware’s Virden Center in Lewes. Lise Funderburg and Chet’la Sebree will be leading the workshops.

We are hoping that we can meet in person. However, there may be COVID-related and/or reopening circumstances that prevent us from doing so. And social distancing requirements may change some elements of the Retreat. We are in regular communication with the venue and the workshop leaders about the possibility of virtual workshops. We’ll keep applicants up to date.

The application process is competitive, and participants will be chosen based on the merit of their work. If selected, the fee for the Retreat, is $325, which includes a private room and most meals. If the Retreat goes virtual, the fee will be significantly reduced.

Lise Funderburg is a writer and editor based in Philadelphia. She studied at Reed College and the Columbia University School of Journalism, and her work has appeared in many publications, including The New York Times, Washington Post, Philadelphia Inquirer, National Geographic, Salon, The Nation, More, and The Chattahoochee Review.

Her latest book is Apple, Tree: Writers on Their Parents (University of Nebraska, 2019), a collection of all-new work by 25 writers, which Publishers Weekly deemed a “sparkling anthology” in its starred review. Her previous book was Pig Candy: Taking My Father South, Taking My Father Home (Free Press, 2008), which was chosen as the Drexel University Freshman Read in 2012. Pig Candy fits into several genres—including narrative nonfiction, memoir, travelogue, and biography—but essentially, it’s a book about life, death, and barbecue.

Lise’s first book was a prescient collection of oral histories, Black, White, Other: Biracial Americans Talk about Race and Identity (Morrow, 1994), the first book to explore the lives of adult children of black-white unions. Black, White, Other, expanded and re-released on its 20th anniversary, has become a core text in the study of American multiracial identity.

Lise has been awarded residencies at the Civitella Ranieri Foundation, MacDowell Colony, Thurber House, and Blue Mountain, among others, and she won a Nonfiction Fellowship from the Pennsylvania Council on the Arts. She is a lecturer in creative writing at the University of Pennsylvania and teaches at the Paris Writers’ Workshop.

Chet’la Sebree (pronounced: Shayla) is the author of Mistress, selected by Cathy Park Hong as the winner of the 2018 New Issues Poetry Prize and nominated for an NAACP Image Award for Outstanding Literary Work Poetry. She is currently working on her second book, Field Study, which will be published by the Farrar, Straus & Giroux imprint FSG Originals in summer 2021.

Raised in the Mid-Atlantic, she earned an MFA in Creative Writing, with a focus in poetry, from American University. She has received fellowships from the Delaware Division of the Arts, The MacDowell Colony, Hedgebrook, Yaddo, the Stadler Center, the Vermont Studio Center, and the Robert H. Smith International Center for Jefferson Studies. In 2018, she was named the co-recipient of Yaddo’s National Endowment of the Arts Residency for Collaborative Teams for her ongoing with collaborator Shayla Lawson.

Chet’la’s poetry and prose have recently appeared or are forthcoming in Kenyon Review, Pleiades, wildness, Guernica, Poetry International, and The Account, as well as other journals and anthologies.

She is an assistant professor of English and the Director for the Stadler Center for Poetry & Literary Arts at Bucknell University.

The Division of the Arts is pleased to support this low-cost multi-day retreat for Delaware writers. The application process is competitive, and participants will be chosen based on the merit of their writing submissions. Work samples will be juried in an anonymous review process to select up to 20 attendees from the pool of applicants split between poetry and prose.

Writers at all levels of experience are invited to apply. While newcomers will be given special consideration, previous attendees of the Division’s Writers’ Retreats are welcome to apply. A needs-based partial scholarship for new attendees may be available upon acceptance into the Retreat.

Applicants must be Delaware residents for at least one year, over the age of 18, and not enrolled in a degree or certificate granting educational program.

Please note, applicants must select between poetry and prose and submit only one application.

We are hoping that we can meet in person. However, there may be COVID-related and/or reopening circumstances that prevent us from doing so. And social distancing requirements may change some elements of the Retreat. We are in regular communication with the venue and the workshop leaders about the possibility of virtual workshops. We’ll keep applicants up to date.

Applicants must choose between poetry and prose and submit only one application.

Schedule for application, notification and payment:

A collection of poetry and prose written by the 2018 Delaware Seashore Poets and Prose Writers Retreat attendees is currently being edited by Billie Travalini and John Newlin.

Here’s what some of the writers said of the experience…

“I was able to work with diverse participants, obtain really constructive feedback on my work and learn new frameworks for improving my skills.”

“I loved the retreat, sharing work with other writers and having that time to immerse myself in my work. I wrote for hours and hours, happily.”

“I came home feeling uplifted, like I’d accomplished something important and new in my own writing and I felt very connected to the other writers and think this will be a lasting thing as we meet again during the coming year at readings, workshops, etc.”

The 2018 anthology, Rooster in the Henhouse, is for sale on Amazon. 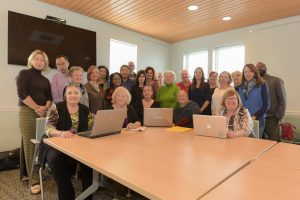 Twenty-two writers from around the state attended the Division’s 2016 Delaware Seashore Poets and Prose Writers’ Retreat from November 3-6, 2016, at the Cottages at Indian River Marina, Rehoboth Beach, Delaware. One attendee summarized the experience, “Amazing weekend of focusing on writing and interacting with other writers. Did wonders for my confidence in my writing skills.” Workshops were led by novelist, H. G. Carrillo and poet, Diana Goetsch.